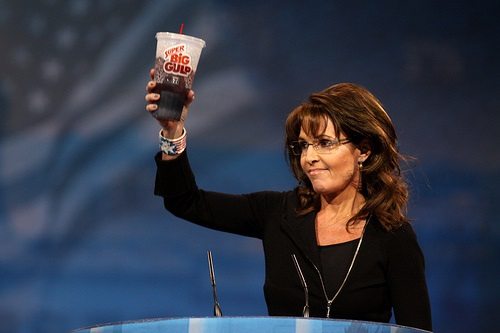 The NAACP’s opposition to New York City Mayor Michael Bloomberg’s proposed ban on extra large sugary soft drinks recently received nationwide attention. On MSNBC’s “Up with Chris Hayes,” NAACP President Ben Jealous acknowledged that the NAACP was opposed to New York City’s ban on serving sugary drinks in containers of 16 ounces or more. Jealous called the ban “ill-conceived from the beginning and ill-executed.” He suggested that one of the reasons the NAACP opposed the ban is that it would nix the oversized sugar-laden drinks at “the mom and pop shops, [but] it wouldn’t have stopped it at 7-Eleven.” Is the NAACP concerned about the 7-Eleven “Big Gulp” gaining a competitive advantage over beverages at local neighborhood stores, or is something else going on?

Did Opponents “Sell Their Soul” to “Big Soda?”

In January, the New York Times reported that the NAACP and the Hispanic Federation jointly filed an amicus (friend of the court) brief supporting the litigation against Bloomberg’s ban. The law firm of King and Spalding, which the Times identified as Coke’s “longtime Atlanta law firm”, wrote the brief. The Times article mentioned that Coca-Cola has given significant support to the NAACP over the years and that the Hispanic Federation’s former executive director, Lillian Rodriguez Lopez, “recently took a job at Coca-Cola.”

Asked about its amicus brief, the New York City office of the NAACP referred questions to the American Beverage Association (ABA), the beverage industry’s main lobbying group. The ABA’s board includes representatives of Coca-Cola, Dr. Pepper Snapple Group, PepsiCo, and Red Bull. In fact, of the 28 officers and board members of the ABA who aren’t employees of the association itself, seven are with Coca-Cola or firms with Coca-Cola in their names, four are with PepsiCo, two are with Dr. Pepper Snapple, and one is with a firm tied to both Coca-Cola and Dr. Pepper.

New York City Mayor Michael Bloomberg declared the NAACP’s opposition to the big drinks an “outright disgrace” and charged the Hispanic Federation, which also opposes the ban, with having “sold its soul.” According to MSNBC, Jealous said that it wouldn’t have come to this “if only Bloomberg had sought the NAACP’s input from the beginning.”

Writing for the Huffington Post, Nancy Huehnergarth contends that “Big Soda” co-opted the NAACP and the Hispanic Federation through philanthropic grants, through grants from Coca-Cola and PepsiCo, and through sponsorships of NAACP conferences and programs. Huehnergarth implies that the NAACP had more of a relationship with Coca-Cola than simply agreeing with the beverage maker’s stand on the New York City ban.

The Coca-Cola Foundation has made some grants to the NAACP and its chapters in 2010 and 2011 ($66,000 to the LIFTED program, $200,000 to the Project HELP program). These grants are small in comparison to others made by Coke’s foundation. They would not seem to amount to enough to constitute a temptation for the NAACP to “sell out.” Huehnergarth also cites numerous Coke and Pepsi program sponsorships and encomiums for the NAACP as further evidence of the close relationship between the NAACP and the sugar-drink manufacturers. Remember, corporations do not have to disclose the specific contributions they make outside of their corporate foundations, such as the program sponsorships and other financial contributions they might make to a nonprofit, which could add up to significant sums.

Let’s be clear about corporate philanthropy, however. Many big companies view paying for program sponsorships, tables, and banners for a variety of groups representing racial or ethnic constituencies as akin to a marketing cost. The money that PepsiCo, Coca-Cola, and others give to these organizations is, for the firms, little more than a rounding error on their marketing budgets. Is it enough to buy the organizations? Unless the NAACP under Ben Jealous is for sale—and that’s not our impression of Ben Jealous at all—it’s hard to imagine. We don’t really buy the argument that this support would buy the NAACP’s soul. However, looking at the amicus brief, we also don’t totally buy the NAACP’s argument.

The amicus brief is correct that Mayor Bloomberg’s ban on sugar drinks covers the vague category of “food service establishments” but exempts convenience stores like 7-Elevens and large chain grocery stores. It also exempts drinks with more than 50 percent milk or milk substitutes, such as milkshakes. These exemptions are troubling and merit correction.

The amicus brief lambastes the ban as both “over-inclusive” and “under-inclusive.” The brief argues that it is “over-inclusive” because banning self-service cups larger than 16 ounces means that customer couldn’t fill large cups with non-sugary diet drinks, unsweetened tea, or water. The “under-inclusive” charge stems from the exemptions mentioned above. However, the brief drifts into a broader challenge of the ban as harmful for small businesses and disproportionately affecting freedom of choice in minority neighborhoods. The brief considers the latter an “unprecedented governmental interference with personal choice and freedom.”

Curiously, the amicus extends its argument to suggest that the ban is insufficient for addressing the problem of obesity: “Both organizations believe that…the City should address the issue of obesity in a comprehensive way in the legislative arena. In particular, both organizations believe that any serious effort to address the crisis of obesity must feature increased funding for and improvements to health and physical education programs in schools.” It cites Hazel Dukes from the NAACP New York Conference “lament[ing]” the “ban on beverage sales, as opposed to increasing funding for health education to combat obesity.” It further cites the Hispanic Federation’s Jose Calderon rapping the City for insufficient health and physical education programs in the schools: “The decision to ignore the need for increased public school physical education and health programs, in favor of a B