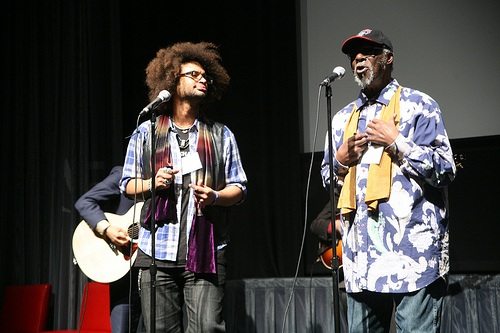 There have been so many songs and singers who have helped to embed the civil rights movement in the souls of Americans over the years, and there are moments many of us associate with each of those songs. Some of them are linked to powerful visual images of violence up against nonviolence.

And so it seemed all too familiar when Lester Chambers—age 73, and formerly of the Chambers Brothers—dedicated the 60s soul classic, “People Get Ready,” to Trayvon Martin, hours before the verdict was read and after he had sung. The video linked below is hauntingly beautiful because of the song, and its abrupt ending—where he is knocked to the ground by an angry woman from the audience—is a horrifying reminder of the work that remains undone.

Chambers was injured, but is recovering at home. The woman was booked on a misdemeanor.

On Sunday, at a concert in Quebec, Stevie Wonder declared he will not perform in Florida or anywhere that has a Stand Your Ground law.

“The truth is that, for those that are being lost in the battle for justice, wherever that fits in any part of the world, we can’t bring them back. What we can do is we can let our voices be heard, and we can vote in our various countries throughout the world for change and for equality for everybody,” he told the audience. “That’s what I know we can do. And I know I’m not everybody, I’m just one person, I’m a human being. But for the gift that God has given me, and for whatever I mean, I decided today that until the Stand Your Ground law is abolished in Florida, I will never perform there again. As a matter of fact, wherever I find that law exists, I will not perform in that state or in that part of the world.”

The video of his wonderful statement is here.

This is not the first moral/political stand that this cultural icon has taken. He has also boycotted Arizona for its anti-immigration laws.—Ruth McCambridge