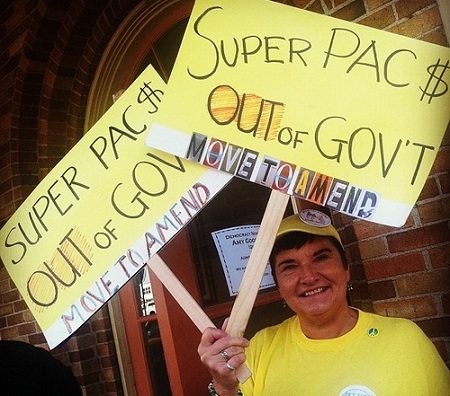 Given the somewhat detailed process of creating a nonprofit organization and obtaining 501(c)(3) public charity status from the Internal Revenue Service, we sort of assumed that there would be a similar (if not much more arduous) process for becoming a super PAC. It looks like we were wrong. Politico reports that it took all of 20 minutes for Mark Satterlee to do the paperwork to establish the Our Country Our Voice super PAC with the intent of funding TV and Internet ads in support of liberal candidates. However, like many other newly minted super PACs, Satterlee has reported a goose egg in fundraising through October.

Politico reports that three out of every five super PACs had fundraising totals to match Satterlee’s zero. The Center for Responsive Politics counted 1,123 super PACs reporting for the 2012 electoral cycle as of November 28th, with $659.4 million in receipts and $680.5 million in expenditures. Remember that these super PACs purportedly operated independent of political candidates and were not able, unlike regular PACs, to contribute directly to politicians.

While there is entertainment value in noting the often silly super PACs that made it to the list (Dogs Against Romney, Joe Six PAC, Eradicate National Debt and the Slam Dunks, Fireworks and Eagles Super PAC), the money totals should be concerning. Just for the 2012 cycle, the top 25 of these 1,123 super PACs accounted for 87.2 percent of all super PAC expenditures. The top 10 accounted for 73.6 percent. The top 10 include some familiar names and a few that probably aren’t so familiar:

Here’s the key to the top super PAC players:

Restore Our Future was the Romney PAC, with major donors such as Sheldon and Miriam Adelson ($20 million); homebuilder Bob Perry, who financed the anti-John Kerry swiftboat ads in 2004 (over $10 million); and million dollar donations from several others such as Robert Parsons of GoDaddy and Robert McNair of the Houston Texans, not to mention scads of hedge fund managers.

American Crossroads was the super PAC arm of Karl Rove’s operation, with major donors including Contran Corporation’s Harold Simmons (at least $17.5 million, not including $2 million directly from the corporation or his contributions to Restore Our Future); Bob Perry, again (at least $7.5 million); and $1 million apiece from the eponymous foundation of Irving Moskowitz and from oilman T. Boone Pickens.

Majority PAC was established to help Democrats maintain control of the U.S. Senate, with well over $3 million from Eychaner and from James Simon of Euclidean Capital.

Club for Growth PAC was a very conservative PAC with a million dollar donation from Perry along with large donations from private equity and hedge fund firm owners, among others.

The Winning the Our Future PAC of Newt Gingrich still makes the list, with $20 million from the Adelsons plus another million from Simmons.

Perhaps the proliferation of small-to-nonexistent super PACs, many of which intend to hang in there and gin up their operations for the next electoral cycles, reflect some sort of laudable small-scale political activism in the arena of super PACs. Are small (or nonexistent) super PACs in some way beautiful? We don’t know. But the concentration of big name donors behind the very largest super PACs is pretty damn ugly for democracy.—Rick Cohen