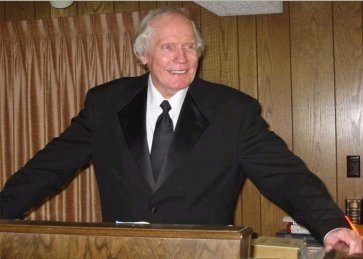 Could you love a man who wrote this?

“We told you, right after it happened five years ago, that the deadly events of 9/11 were direct outpourings of divine retribution, the immediate visitation of God’s wrath and vengeance and punishment for America’s horrendous sodomite sins, that worse and more of it was on the way. We further told you that any politician, any political official, any preacher telling you differently as to the cause and interpretation of 9/11 is a dastardly lying false prophet, cowardly and mean, and headed for hell. And taking you with him! God is no longer with America, but is now America’s enemy. God himself is now America’s terrorist.”

This article by Steven Petrow for the Washington Post provides a little grist for reflection for those of us wondering how to react to the news of the death of Rev. Fred Phelps of the Westboro Baptist Church. Petrow points to the question being asked on Twitter: Might the death of this miserably hate-filled 83-year-old be a cause for celebration?

Phelps is known for his soul-assaulting protests at military funerals for purposes of “opposing the homosexual lifestyle of soul-damning, nation-destroying filth,” as well as the existence among us of Jews and Catholics, among others. In Phelps’ view, the death of young men and women in war and terrorism was God’s way of punishing the United States for its tolerance (such as it was) of gay rights. The church traveled hundreds of miles to picket mourning families with signs that inconceivably read “Thank God for Dead Soldiers” and “Thank God for 9/11.”

As Petrow recalls, however, the public first noticed Westboro Baptist when it picketed the funeral of Matthew Shepard who was beaten to death in what many believe to have been a hate crime. The signs for that event read “Fags are nature freaks,” “Matt in Hell,” and “God Hates Fags.”

But Petrow points out that when Shepard’s mother, Judy Shepard, was asked about Phelps a few years ago, she responded, “Oh we love Freddy. If it wasn’t for him, there would be no Matthew Shepard.” By which, we assume, that his death would have been less noticed and less impactful, less responsible for the change that was to follow.

Now, some are suggesting that it would be fair play to picket his funeral, but Petrow suggests this is the wrong approach.

“Instead, what if those on the receiving end of Phelps’s ideology did the opposite, which is to say, let him go quietly—and without protest—into that good night?… Revenge against Phelps—or, frankly, any hateful or toxic person—doesn’t really allow for healing. Joseph Burgo, a psychoanalyst and an author, told me this week: ‘For those of us who have felt hated and shamed by people like Phelps, the temptation is to turn tables and triumph over their demise. You might think of it as “giving back” the hatred and shame that was inflicted upon us, but this reaction binds us to the other person as long as we continue to feel that way.’ He then added that we need ‘to break the hold of these destructive emotions and move on.’”

“So,” says Petrow, “with Phelps’s passing, I suggest we bombard Westboro Baptist with sympathy cards and prayers. Or, as a friend of mine tells me: ‘Drive your enemies really crazy: Love them.’ Okay, maybe not love, but at least not hate. Never hate.”—Ruth McCambridge