What Will Low Sales on Black Friday Mean for Giving Tuesday?

Though experts were predicting a healthy uptick in the number of shoppers expected to hit stores and online sites on the four-day weekend that includes Black Friday, spending actually declined from the $57.4 billion spent in 2013 to $50.9 billion in 2014—an 11 percent drop. The number of people shopping dropped by 5.4 percent, and those who did shop were spending less.

According to the National Retail Federation, the average shopper spent $380.95 this year, as compared to $407.02 in 2013. Although the NRF had itself predicted an increase in sales this year over last of 4.1 percent, it worked quickly to spin the results, saying that it figured that the decline was related to early promotions and speculated that the decrease in shopping and spending might reflect a positive attitude, in that consumers were not as worried as they are normally about getting a deal. They also predict that the season as a whole will show increases, and that it may just be Black Friday itself that has run its course.

But the ranks are not unbroken: Walmart and Best Buy do not agree with NRF’s enthusiasm and have kept their own fourth-quarter predictions of increases quite modest.

Of course, there were also a number of actions going on during Black Friday, including “No Justice, No Profit,” an initiative to boycott shopping after no indictment was handed down in Ferguson. 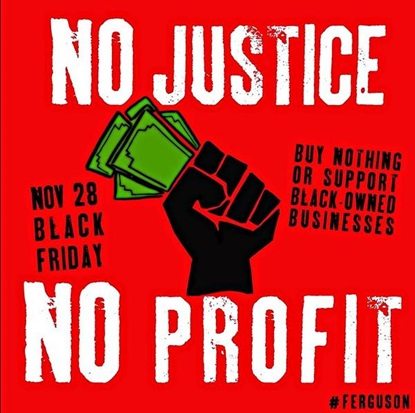 This effort took off on Twitter among other places, using the hashtags #BlackFridayBlackOut, #BlackFridayProtest and #BoycottBlackFriday. As many readers will remember, boycotts are a traditional tool for civil rights efforts.

Large rally in NYC outside of the largest Macy’s in the world. #BoycottBlackFriday#BlackoutBlackFridaypic.twitter.com/ye5KPXlbW5

Two Macy workers walked off their jobs to support #MikeBrown#ShutItDown#BoycottBlackFridaypic.twitter.com/Iov812h42U

BREAKING: A group of protesters just entered Macy’s in NYC, the largest store in the world. #BoycottBlackFridaypic.twitter.com/FtZfGrzy5X

Depending on what you think happened to tamp down buying enthusiasm last weekend, we could draw some assumptions about giving this season, as well. In light of all of that, what do we think will happen on Giving Tuesday? At least one enthusiastic fundraiser has forecast that proceeds will double from $27 million to hit $54 million, giving these three reasons why:

3 Reasons Why #GivingTuesday will double this year

And, in fact, #GT proceeds have doubled two years in a row. We would love to hear from our readers: What are your predictions and feelings about whether this giving holiday is a boon or bane to your fundraising in general?—Ruth McCambridge