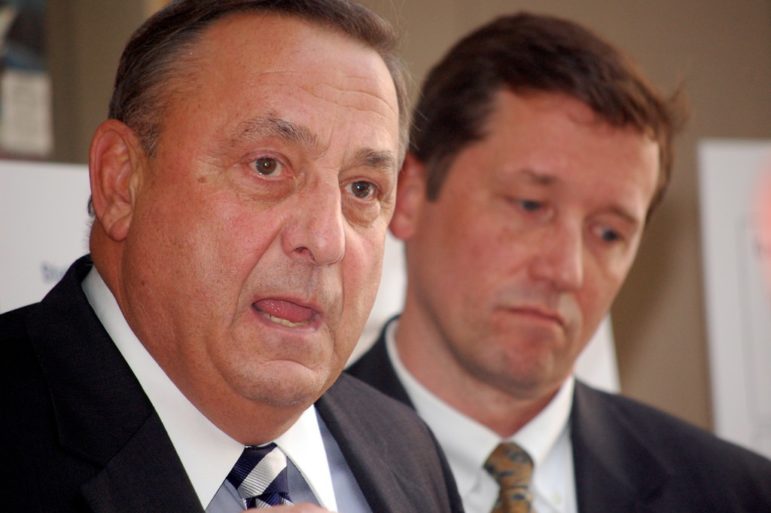 Maine’s Gov. Paul LePage sent a letter to the top 200 donors of the Natural Resources Council of Maine (NRCM), effectively saying: I know your name; I know where you live; I am not happy with your support of NRCM; rethink and break off your support now.

NRCM provides a list of 40 public attacks by LePage over the past two months. LePage displayed these black and white, Old West-style wanted posters targeting NRCM, Maine AFL-CIO, and Maine People’s Alliance. He gives his vocal critics the imperious “buh-bye” as they are escorted from his town hall meetings.

Earlier NPQ analysis of LePage’s “rough political hardball” includes the abuse of power allegation that LePage threatened to pull state funding from a school that intended to hire a political opponent. When LePage was invited to meet with NAACP, leaders he replied, “Tell them they can kiss my butt.” LePage removed a large mural that depicts the history of Maine’s labor movement. His vile comments having to do with Vaseline or saying out-of-state drug dealers are prone to “impregnate a young white girl before they leave” are no longer unanticipated by Mainers. An effort to impeach LePage over these and other matters was ultimately killed by a 96-52 vote.

In his two-page letter, LePage seeks to make NRCM donors “aware of the organization’s true intent.”

“The job-crushing, anti-business policies of NRCM are preventing rural Mainers from getting the kinds of jobs they need to raise themselves out of poverty.”

LePage’s advocacy on behalf of the poor is belied by his imposition of a food stamp asset test, described by the Washington Post as a “stunning way to keep the poor in poverty.” Maine Public Broadcasting also calls LePage’s letter factually incorrect:

But Bennett’s claim that NRCM spent millions lobbying the Legislature is overstated. According to state lobbying reports, the group paid one lobbyist a little over $20,000 during the last session. That’s about half of the $43,000 SunRun, Inc. paid its lobbyists to help LePage defeat a landmark solar bill this year—legislation NRCM supported.

In his war against NRCM, the governor is wasting the taxes of hard-working Mainers, including NRCM members, to attack the state’s leading organization that works to protect Maine’s environment and promote a sustainable economy. That is unacceptable behavior.

LePage’s attack is a more gift than a threat to NRCM. There is “war” underway, but LePage’s harassment of NRCM donors is merely an ugly skirmish. It is easier to envision the end of the world than to hope with any degree of assurance that globalization will lay down its weaponry nested in economic systems that inhibit any serious systemic response to the climate change challenge. As long as giant polluters and plutocrats drive the world’s democracies, we will watch our planet slowly die.

For more than 50 years, NRCM has reaffirmed embattled civic values and pursued its mission to help save the environment with an annual budget that now hovers around $2.5 million. As the terra firma of Maine’s beloved coastline borders a sea spooling out to the rest of the world, NRCM remains anchored in the necessity of its daily battles. LePage may be unhinged and dangerous but he is a very small danger in the mix of big issues that NRCM confronts. —James Schaffer