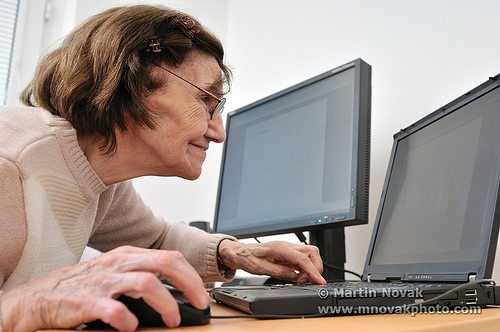 For the first time, the majority of U.S. adults over 65 use the Internet or email, according to a new report by the Pew Internet and American Life Project. The rapid growth of Internet use among seniors means that organizations that serve older populations should examine how well they are integrating technology into their work.

As of April 2012, 53 percent of American adults age 65 and older use the Internet or e-mail. Though seniors are still less likely than all other age groups to use the Internet and the rate of use drops off after age 75, the gains in technology adoption among older adults are significant.Seniors represent the largest age group and one of the fastest growing populations in the United States.

Access to technology means access to friends and family, news, government services, and healthcare. Seniors who go online experience a 20 percent decrease in depression rates, and those who participate in remote health monitoring programs make fewer trips to the doctor and have lower medical costs, according to Josh Gottheimer, senior counselor to the chairman at the Federal Communications Commission.

“Seniors need to be online to be productive and to be full participants in our society,” says Anthony Wilhelm, the director of the Broadband Technology Opportunities Program (BTOP) at the National Telecommunications & Information Administration (NTIA).“It’s not so much what the Internet can do for seniors but what seniors can do for the Internet…seniors are the most experienced and some of the most creative members of our economy.”

In both the Pew Study and other research,seniors cite cost, relevance, and lack of digital literacy as barriers to Internet adoption. These are the same barriers to technology adoption often cited by other groups on the other side of the digital divide, such as people in low income households, people of color, and people with disabilities. For seniors, however, barriers to broadband adoption have unique dimensions.

Access to high-speed networks, for example, can include sacrifices seniors may have to make to adopt broadband. “Affordability isn’t just do you have the money to pay for [broadband],” Christopher Baker, senior strategic policy advisor at AARP’s Public Policy Institute says, “but it’s also ‘do you have to give up half of your medicine to pay it?’”

Another barrier preventing seniors from adopting broadband stems from security breaches they see on the news, according to Samantha Becker, research project manager at the University of Washington Information School’sU.S. Impact Study. “[Organizations that serve seniors] need to teach them how to use the Internet safely,” she said.

Connected Living,an organization that provides technology training to seniors, discovered that another major obstacle some seniors face is not only the lack of digital literacy, but also the lack of traditional literacy.While training more than 2,500 residents from low income senior housing facilities in Northern Illinois, Connected Living found that only 80 percent of senior participants had at least an eighth grade education.

Once online, most seniors make Internet use a regular part of their lives. E-mail is the primary tool for online communications; 86 percent of Internet users age 65 or older use e-mail, with 48 percent doing so on a typical day. Two-thirds of seniors own a cell phone and one-third use social networking sites. For nonprofits that serve senior populations, this rapid growth of Internet use among adults over 65 has significant implications. –John Hoffman