Many NGOs Dislike “The Future We Want” 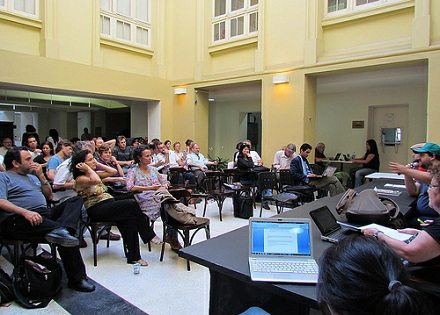 Don’t you wonder about the value, importance, and on-the-ground impact of some of the international conferences meant to address big societal, environmental, or planetary problems? Rio+20 (so named because it is the twentieth anniversary of the 1992 United Nations Conference on Environment and Development) is the shorthand for the United Nations Conference on Sustainable Development, occurring right now in Rio. There were plenty of discussions leading up to the conference earlier this month, resulting in the release of the draft Rio+20 agreement. Overseas, Rio+20 got lots of press coverage and NGO attention, while in the mainstream U.S. press, coverage of the U.N.-sponsored deliberations on sustainable development has so far been somewhat muted at best.

NGOs monitoring the process have eviscerated the draft report, titled “The Future We Want.” According to Jonathan Watts, reporting for the Guardian, “Environmental and anti-poverty organisations at Rio+20 have responded with a mixture of fury and dismay to the watered-down final draft for the sustainability conference that has been presented by the Brazilian hosts, just hours before world leaders fly in.” Watts reported that “civil society groups say the new text simply acknowledges the world’s dire environmental and social problems without spelling out how to deal with them.” Jim Leape, the head of WWF International, called the agreement “pathetic.”

As the Rio+20 host nation, apparently Brazil was responsible for drafting the report, which has put it in the crosshairs for NGO complaints. The cumulative complaints about the report include its nearly total lack of “timetables, definitions or ways to monitor new sustainable development goals,” the absence of language that would “strongly commit nations to move to a ‘green economy’ that integrates environmental and social costs into decision-making,” “the weak language on valuing ecological services and tackling unsustainable levels of consumption and production,” and “the lack of initiatives on food and financing.”

Triple Pundit commentator Akhila Vijayaraghavan said that the report “leaves so much to be desired…[that it] would seem more appropriate for the first Rio Earth Summit than this one.” Vijayaraghavan quotes Kumi Naidoo, the international director of Greenpeace, offering a clear and sharp critique: “The approach that has been taken is to go for the lowest common denominator. The trick here is to look very carefully at the UN-ese language being used. If they use the world ‘voluntary’, it means it is not going to happen.” All the big countries got what they want in or out of the document in this LCD approach, so nations like China get to avoid specifics on monitoring, the European Union gets to sidestep demands for financial commitments, and the U.S. gets to nod yes to the agreement without having to do anything that would require compliance with new international or United Nations requirements (and perhaps even allowing this country to slip out of prior agreements).

Leap said that if this document gets approved by the heads of state convened in Rio, “then the last year of negotiations…[will have] been a colossal waste of time.” Was it a colossal waste of time because of the crummy document? Or was it a waste of time from the get-go? That is, were the participating big countries destined to never approve a document that would commit them to do things on the orders of an international body? Imagine the reaction of Tea Party Republicans in the U.S. Congress if the Obama administration presented them with agreements reached in Rio with 100 other countries on biodiversity and a green economy.

“The Future We Want” is the report international NGOs don’t want, because it has no hammers for coimpelling compliance and it has no specific goals against which compliance can be demanded. But wasn’t this going to be the result all along?—Rick Cohen