Many Rally in Support of Palestinian Hunger Strikers Held by Israel 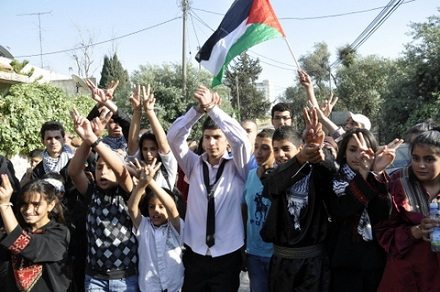 Of the approximately 4,700 Palestinian prisoners in Israeli prisons, at least 1,500 are now participating in a hunger strike, some for as long as 70 days. The Palestinian Telegraph puts the number closer to 2,500. Ten are now in the hospital and two are in critical condition. First among the hunger striker’s concerns is the practice of “administrative detention,” or the ability of the Israeli state to hold a prisoner for six months without charging them or revealing evidence against them. The six month term can be renewed an indefinite number of times and this results in some prisoners being detained without evidence for years. Some prisoners have also been denied family visits or access to lawyers.

Palestinians have been rallying regularly outside of the Ofer prison to express support to the hunger strikers and yesterday a few dozen youth blocked U.N. staff in Ramallah from entering their offices, demanding that U.N. Secretary-General Ban Ki-moon take action, as you can see here:

Apparently, the crowd outside of the U.N. building in Ramallah grew to hundreds, with mothers holding up pictures of their imprisoned family members. According to a spokeswoman, this may be the first of a number of actions targeting international organizations for not taking a stand for the prisoners’ human rights under international law. –Ruth McCambridge