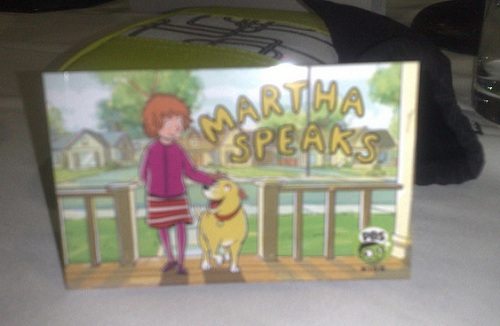 Susan Meddaugh, whose “Martha Speaks” series of children’s books inspired the TV show, is suing WGBH for a portion of the donations it receives from its audience—estimated at $20 million a year—because, the suit alleges, WGBH uses “Martha Speaks” to solicit those contributions.

Meddaugh claims that the nonprofit PBS affiliate WGBH uses her intellectual property to make money on ventures without her agreement and that they have not shared the proceeds. Meddaugh contends that, since the show helps attract contributions, she should be apportioned some of the gifts, since her contract requires that WGBH pay a percentage of all “net proceeds” of the show.

It is estimated by PBS that more than 4 million households nationwide watch “Martha Speaks” every week and there have been eight episodes of the popular show which is now going into its fifth season premieres this month.

“There’s nothing in the agreement that would give her a right to that [donation] money,” said John Taylor Williams, who has negotiated similar deals with WGBH, saying that WGBH had broad discretion within the contract. Meddaugh contracted in 2005 with WGBH, granting it the right to produce a TV program based on her books. The sum she was paid at that time is still undisclosed, and she has received more during the production of each episode.

Meddaugh says her hired auditors found that WGBH artificially inflated expenses of the “Martha Speaks” program and has fudged the books. This allegation comes directly after WGBH paid more than $300,000 to settle a Department of Justice action that found that the station’s accounting practices were “insufficient” to provide accountability on federal grants.

To complicate the whole thing, Meddaugh is contesting a deal for the production of mobile apps and a sponsorship deal between WGBH and Chick-fil-A that allows the fast food purveyor to place “Martha Speaks” storybooks in its kids’ meals. The complaint noted, “the Internet is replete with information about Chick-fil-A’s antigay position, which Meddaugh abhors.”—Ruth McCambridge