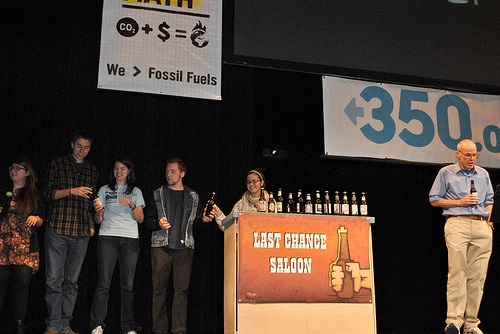 If you don’t know the name Bill McKibben, you have probably seen the results of his work. McKibben is the cofounder of 350.org, the organization that has had as much impact as any in promoting divestment from fossil fuels. His op-ed for the Washington Post this past weekend challenges why anyone would give any credibility to ExxonMobil on the issue of climate change. He discusses ExxonMobil CEO Rex Tillerson’s speech at a recent company’s shareholder meeting in which, according to McKibben, Tillerson made light of climate change and mocked renewable energy. Tillerson rejected the notion that ExxonMobil would consider investing in sun or wind energy because, in McKibben’s words, “clean technologies don’t make enough money and rely on government mandates.”

McKibben suggests that “Tillerson’s performance…forever breaks the idea that ‘shareholder engagement’ with companies such as ExxonMobil accomplishes anything.” In other words, there is no point in universities and foundations holding onto their stock investments in the Exxons of the world because they won’t change. There is no productive engagement with Tillerson and Exxon. He suggests that the decision of Vermont Treasurer Beth Pearce, supported by Vermont governor Peter Shumlin, to hold onto their fossil fuel investments on the theory that, Shumlin said, “we are making our voice heard” is a fruitless strategy. Pearce’s shareholder initiative to get ExxonMobil to set greenhouse-gas emission targets got only 10 percent of shareholder votes.

Shareholder resolutions like Pearce’s aren’t going to change ExxonMobil. Rather, says McKibben, “they’re designed instead to take pressure off officials like Pearce and Shumlin, who don’t want to offend Wall Street by divesting.” Former Securities and Exchange Commission member Bevis Longstreth says that clean energy initiatives with ExxonMobil are like “trying to convince Philip Morris to give up making cigarettes or Johnnie Walker to abandon its distilleries.” He said that the kind of greenhouse gas resolution that Pearce pushed at ExxonMobil is “most certainly…a fool’s errand.”

Will divestment do anything more to change ExxonMobil than shareholder resolutions? McKibben is a realist: “Divestment won’t move ExxonMobil directly—that’s impossible; the company is dug in, and someone else will simply buy the stock when it’s sold.”

“But,” McKibben argues, “divestment will undercut the industry’s political power, just as happened a generation ago when the issue was South Africa and hundreds of colleges, churches, and state and local governments took action…Divestment is one tool to change the zeitgeist, so that the day arrives more quickly when the richest and most powerful can no longer mock renewable energy and play down climate change.”

It is as we thought: The importance of divestment is its political impact on the public, as major, respected institutions declare that fossil fuels cannot and should not be defended. It is this kind of clear, pragmatic analysis that explains the influence that McKibben and 350.org have had in the fight to reverse the trend of manmade climate change.—Rick Cohen