Meaningful Ways of Honoring the Veterans of the Korean War 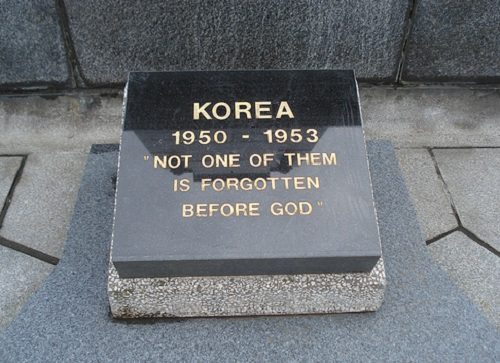 This past weekend was the sixtieth anniversary of the signing of the Korean War armistice, ending three years of warfare on the Korean peninsula that saw the deaths of nearly 37,000 members of the U.S. military, with some 8,100 more still counted as missing. (Note that 415,000 South Korean soldiers died in the conflict, which is more than ten times the number of American soldiers who died—a fact that doesn’t seem to make it into television and movie portrayals of the war.) It’s a death toll that’s hard to fathom, and would in all likelihood be found completely unacceptable by the American population today. From 2003 through 2012, the U.S. suffered 4,486 military fatalities in Iraq, and from 2001 to 2013, the military death toll in Afghanistan has been 2,255—over 8,000 coalition troops have died in both conflicts. Nearly 1.8 million Americans served in the Korean War, and over 5.7 million Americans were in the service, whether in Korea or elsewhere, during that time; CNN estimates that there are 2.275 million veterans still alive from that era.

Korea, however, was a different kind of conflict. Americans were tired of war and tired of a conflict that left both sides in trenches at the end of hostilities nearly where they were when the conflict started. President Obama’s speech honoring Korean War veterans last weekend was unusual, laced with the odd, somewhat jingoistic statement that “that war was no tie, Korea was a victory.” That speech had the president offering Korean War veterans, now in their late 70s, 80s, and beyond, the “highest tribute” that they should have received at the time of the armistice.

What could, or should, be the highest tribute to Korean War veterans now, six decades after the armistice? We can think of several arenas for White House and the Congress to explore that would honor Korean War veterans and stand as valuable correction and reevaluation of the vets’ oft-stated rueful lament that their comrades had to “die for a tie.

Senior citizens: Data released by the Veterans Administration in the spring indicated that a significantly larger proportion of male war veterans were senior citizens than male non-veterans:

These statistics would imply that one of the best things the U.S. can do now for Korean War veterans is to ensure that they provide adequate funding and support for programs for the elderly and, given the proportion of the living 20 million veterans older than 85, for the frail elderly. If our nation is really committed to helping elderly Korean War veterans, it would be reversing the devastating sequestration cuts in the Meals on Wheels program that provides meals and other services to the homebound elderly, especially in rural areas. The nation would be assiduously protecting Medicare from cuts and trying to expand Medicaid; remember that there are millions of senior citizens who are considered “duals,” so poor that they are eligible for both Medicare and Medicaid simultaneously, and many in the age and health category of the frail elderly. To honor Korean War veterans, the U.S. wouldn’t tolerate efforts like those of Governor Bobby Jindal to cut Louisiana’s programs that help senior citizens by obtaining free medicines from pharmaceutical companies. The list could go on and on, but you get the point.

Rural America: While even the White House and the U.S. Department of Agriculture can’t get the numbers correct, it appears, according to the intrepid reporters at the Daily Yonder, that rural residents enlist in the military at a rate 21.5 percent above the national average. The band of brothers and sisters who comprise the U.S. military today, much as they did during the Korean War, comes disproportionately from rural America. Assuming that a good proportion of veterans return to their home communities, and others of retirement age choose the lower costs of rural living, the U.S. would honor elderly Korean War veterans by making sure that the nation doesn’t lessen its commitment to, and reinvestment in, rural America. Several reports show that sequestration has had a disproportionately negative effect on rural hospitals (including here, here, and here). Similarly, rental housing assistance in rural communities is going to take a huge hit in the second year of sequestration cuts, according to Moises Loza of the Housing Assistance Council. Defending programs for rural America, by virtue of geography, would benefit Korean War veterans.

Helping all veterans: It would be hard to imagine that Korean War veterans aren’t concerned, or sometimes aghast, at assistance to the veterans of Afghanistan and Iraq as they return stateside. Last year, the VA reported that 45 percent of veterans of Iraq and Afghanistan were seeking compensation for service-related injuries—more than double the rate of filings by veterans from the Gulf War—and, on average, for eight to nine ailments at a time (compared to four for Vietnam veterans receiving compensation, and two for World War II and Korean War veterans). Although the Veterans Administration was suffering from a huge backlog of claims as of last year, the VA has made progress in cutting into the volume of pending claims in the past year. However, still-pending claims in May of 2013 were almost twice as many as in May of 2009, and claims classified as backlogged were four times as high. The progress that the VA has made isn’t due to the administration’s internal impetus for improvement, but as a result of the scathing criticisms from associations of Afghanistan and Iraq war veterans as well as members of Congress. What would honor the veterans of the Korean War would be a successful reform of the VA’s longstanding dysfunctional culture.

The problems at the VA are being addressed, and other problems faced by U.S. veterans, particularly the high unemployment rate of veterans, have begun to recede. But improvements at the VA, while demonstrable, still leave 800,000 pending claims and 500,000 backlogged claims. Unemployment for veterans, once higher than the general public, is now relatively equivalent to the unemployment rate of non-veterans—too high to be sure for any economy, and too dependent on low-wage, part-time jobs, but an improvement in veterans’ conditions nonetheless. If we want to honor 80- and 90-year-old Korean War vets, our nation might choose to ensure that the veterans of today’s wars get the assistance and support they need to successfully integrate back into domestic life.—Rick Cohen