Messages for Nonprofits from State of the State Addresses 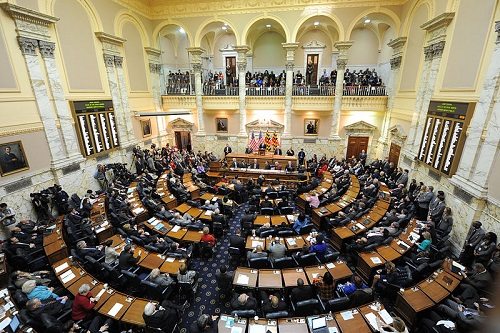 It may be that the majority of State of the State speeches, delivered by governors turning left and right to see text on teleprompters and embedded with artificial applause and standing ovation moments, are kind of boring and bombastic. Some, however, might reflect not only the plans of individual governors for the coming year, but political patterns emanating from state capitals that have reverberations for the federal government—where a State of the Union address is in the offing.

Term limited as Maryland’s governor, Martin O’Malley may be running for president. In his last State of the State address, delivered last week, O’Malley summed up his seven years in the governor’s chair as having made Maryland “stronger than before…[and] cleaner, smarter, safer, healthier, more entrepreneurial and more competitive.”

He also offered content that might have a bearing on other states and the federal government. For example, O’Malley acknowledged that the rollout of the Maryland health exchange has been a “failure,” perhaps suggesting through his candor that he would be willing to take on and fix the implementation of the Affordable Care Act if he gets into the White House. He proposed expanded access to pre-kindergarten education, stronger domestic violence protections, and an increase in the state’s minimum wage from $7.25 to $10.10 an hour by 2016. Minimum wage increases also popped up in other governors’ addresses—for example, Hawaii’s Neil Abercrombie proposed an increase to $8.75 by 2015, though a Hawaii state senator, Clayton Hee, has already introduced legislation aiming for $10.10. Like O’Malley, Abercrombie also advocated increased opportunities for early childhood education.

Other Democratic governors seemed to adopt a more moderate or even conservative stance. New York’s Andrew Cuomo proposed a Republican-sounding $2 billion in tax relief plus a surprising easing of the state’s gift and estate tax, generously raising the exemption level from $1 million to $5.25 million. These tax proposals earned Cuomo the praise of Republican State Senate Leader Dean Skelos, who characterized him as a “good, moderate Republican.” In California, Governor Jerry Brown urged fiscal “prudence” to counter the state’s “wall of debt.” Along with fiscal austerity, Brown’s call for regulatory streamlining as a means for encouraging business development and job creation drew praise from the governor’s ostensible Republican critics.

Wisconsin’s Scott Walker, a Republican, got over 40 standing ovations for his State of the State address, but not many of his statements got Democratic kudos like the Republican plaudits that greeted Brown’s and Cuomo’s. In this politically divided state, the Facebook posting of state representative Christine Sinicki from Milwaukee might have conveyed the sentiments of some Democrats: “OMG…this speech is so full of sh**. Wish I could get up and walk out.”

Like Brown, however, Walker touted fiscal austerity, and like Cuomo talked about returning some revenues to taxpayers in the form of tax cuts that might stimulate the state’s economy. Michigan’s Republican governor Rick Snyder also applauded the state’s improving economy and hinted at the possibility of tax reductions this year.

Unlike O’Malley, Walker congratulated himself for protecting Wisconsin taxpayers from “the uncertain potential cost of federal Medicaid expansion” without explaining how the healthcare costs of the state’s lower income residents might be addressed. His Missouri counterpart, Jay Nixon, leads a state that so far hasn’t expanded Medicaid coverage, but he advocated just that in his State of the State. “We all know there are problems with Obamacare, and Washington’s implementation of it has been abysmal,” the Democrat Nixon said. “But rejecting Medicaid won’t fix any of those things. It won’t keep Missourians from having to pay federal taxes, or exempt our businesses from new requirements under the law.”

Do these state addresses presage anything that nonprofits might hear in President Obama’s State of the Union? The president is entering his lame duck phase, unlike all of these governors who either have reelection ambitions or, like O’Malley and perhaps Walker, aspirations for the national stage. He might be freer with commitments to pursue what might be seen as progressive themes than the more cautious governors, whose progressive instincts touched on the minimum wage and early childhood education, themes that most nonprofits would probably endorse.

Nonetheless, the overall tone of the State of the State addresses was one of political moderation, with Democrats sounding tax and budget themes that some Republicans might well endorse. Whether nonprofits concerned about making repairs to the nation’s social safety net will be quite as happy with the governors’ State of the State messages is another matter.—Rick Cohen