Messin’ with Nonprofit Ethics in Texas 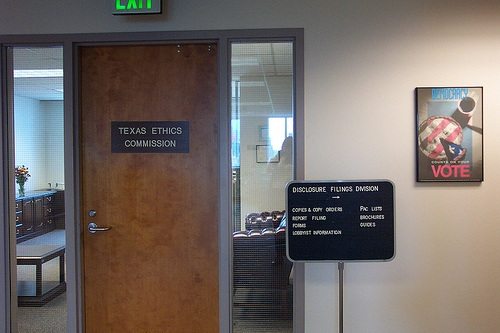 There may have been some confusion regarding nonprofit ethics in Texas in the wake of a controversial draft opinion from attorneys for the state’s Ethics Commission. The draft opinion would have barred legislators from heading any nonprofit organization if they also solicit contributions for that agency. Commissioners balked and tabled the measure but reportedly planned to revisit it this week.

According to the Texas Tribune, Ethics Commission Vice Chairman Jim Clancy, who was appointed by Texas Gov. Rick Perry, articulated a concern over the realities of community involvement in a part-time Texas state legislature in a November discussion of the issue: “We pay our legislators, what, $6,000, $7,000 a year? If we’re going to have a citizen legislature, they’re going to be involved in stuff.” Clancy noted that the tabled provision is being brought back before the Commission for a vote but it will not include the language that would prevent legislators from doing nonprofit “stuff” while fundraising for a nonprofit and serving in the legislature.

Outgoing Commission Chairman Tom Ramsay adds, according to the Tribune: “There’s a line that can’t be crossed — it can’t just be a position [at the nonprofit] that’s a figment of someone’s imagination. But we just don’t need any more rules or regulations.”

Clearly, the Commission attorneys who authored the original opinion believed that working for and shilling for a nonprofit while serving in the state legislature could lead to the appearance of impropriety; for instance, could a donation to a nonprofit that a legislator is working at and raising money for be viewed as an attempt to buy influence with that legislator on some issue that he or she may vote on? The attorneys who wrote the original draft opinion felt that such a possibility “could reasonably be expected to impair” the legislator’s “independence of judgment” in such a situation.

The conflict of interest possibilities seem real, but it sounds like the Commission is chalking them up to the price of having a legislature that isn’t comprised of career politicians. The Commission has drawn some criticism from Craig McDonald of Texans for Public Justice, a government transparency advocate, who says, “It does a good job as a librarian; it doesn’t do a good job as a cop.” –Louis Altman