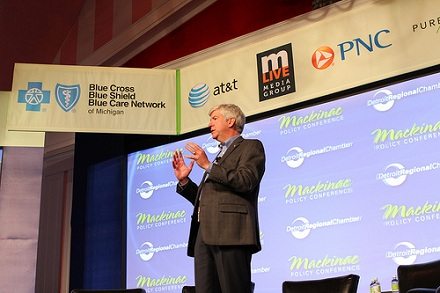 Gov. Rick Snyder (R-Mich.) has proposed legislation that would convert Blue Cross Blue Shield of Michigan (BCBSM) from its current tax-exempt status to a taxable mutual insurance company. On the plus side, BCBSM would lose its “insurer of last resort” status and therefore, like other insurers, get a faster turnaround on rate reviews and other governmental actions it needs. From Snyder’s perspective, there’s an additional benefit: the idea that the newly taxable BCBS would pay $100 million a year in state and local taxes.

The negative is—well, we would guess the negative is that there’s something that’s lost in the shift of BCBS to something other than its traditional nonprofit status. Snyder would have it establish a separate nonprofit with contributions of up to $1.5 billion over 18 years to work on health issues such as obesity and infant mortality.

Gov. Snyder defended his proposal to remove BCBSM’s role as insurer of last resort by referring to President Obama’s Affordable Care Act, suggesting, “What the federal law really does is create the marketplace as the insurer of last resort,” because now insurance companies in general are required to accept patients regardless of preexisting conditions.

According to Snyder, Blue Cross entities in 18 other states have already undergone this kind of transition, which we take to mean the conversion of nonprofit BCBS operations to for-profits flanked by the creation of separate private foundations. In 2009, Grantmakers in Health counted 197 health conversion foundations in the U.S. and briefly profiled 155 of them, though which of them were created from BCBS assets isn’t specifically identified in the report. Among the health foundations that we know were created from Blue Cross assets are the Foundation for a Healthy Kentucky, the California Endowment and the California Wellness Foundation, the Healthcare Georgia Foundation, and the Missouri Foundation for Health, just to name a few.

However, the structure that Snyder has proposed may be more akin to Blue Cross of Idaho Foundation for Health, an independent licensee of Blue Cross, with a program focus on tobacco use and obesity, that is more connected with, though legally independent from, Blue Cross. Just from the news coverage in the Free Press, we don’t know the exact specifications of how the Snyder model fits the 18 similar Blue Cross “transitions” that he says have occurred in other states.

At the same time, the Michigan legislature rebuffed Snyder’s effort to get a health exchange created, so the governor is now negotiating with the federal government to establish an exchange without having to get legislative authorization. Since Snyder’s proposed conversion of BCBSM is a reflection of his understanding of how the Affordable Care Act relies on market forces, it is an indicator of just how much in flux the nation’s entire health care system is and will be for some time in the future. Nonprofits in the know should weigh in with NPQ on how they interpret the Snyder proposal and whether it will be good or bad for health care reform and for the Michiganders who need health insurance coverage.—Rick Cohen