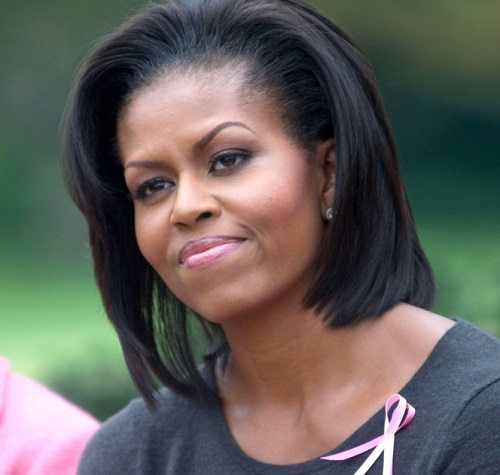 To be fair to Laura Bush, Hillary Clinton, and even Condoleezza Rice—the latter joining the official delegation to Riyadh to honor the passing of King Abdullah and acknowledge the accession of King Salman—Michelle Obama wasn’t the first recent woman dignitary to visit the rulers of Saudi Arabia without donning a headscarf. What was interesting was watching CNN’s repeated showings of video of Saudi dignitaries shaking President Obama’s hand while passing the First Lady by without a handshake, sometimes with nary a glance of acknowledgement. Her facial expression was priceless.

One gets the sense that Michelle Obama doesn’t suffer indignities well, and good for her. Sometimes the greater latitude available to the person who doesn’t happen to be the POTUS means the First Lady comes off much better than the First Gentleman. That may explain why in administrations past, Laura Bush, Barbara Bush, and even Rosalynn Carter were frequently viewed much more positively than their husbands.

Wearing a headscarf is not required for Western women visiting Saudi Arabia, though many do so out of respect for the customs and culture of the nation. There were suggestions both in Saudi Arabia and in the U.S. that the First Lady should have covered her head as a sentiment consistent with this administration’s (and its predecessor’s) call for respecting rather than denigrating Islamic culture. Unlike local women who forego the headscarf, Ms. Obama and other western women won’t be picked up by the mutaween, the police who enforce Saudi Arabia’s strict religious codes. But it got attention, to be sure, even with charges and Saudi denials that Saudi TV blurred the image of the First Lady.

The Washington Post’s Nia-Malika Henderson declared Michelle Obama’s decision not to wear a headscarf “a bold political statement” and added comments from two of her predecessors:

Henderson noted that Laura Bush recalled the Saudi delegation walking out of the WEF gathering before she got to those lines.

Oddly, just before landing in Saudi Arabia, President Obama spoke in Delhi to an audience of college students and made it clear that he was willing to boldly challenge India, where incidents of abuse and rape have been recently well publicized, on issues of women’s equality:

“‘We know from experience that nations are more successful when their women are successful,’ said Obama. ‘These are facts. So if nations really want to succeed in today’s global economy, they can’t simply ignore the talents of half of their people.’

“‘Every daughter deserves the same chance as our sons,’ he added. ‘And every woman should be able to go about her day—to walk the street, or ride the bus—and be safe and be treated with the respect and dignity that she deserves.’”

One can only hope that in addition to her powerful visual statement, the First Lady also got to tell someone in authority that they should cease the flogging and jail punishment of blogger Raif Badawi, whose crime, it appears, was openness to religious tolerance. Especially because in the same speech he made in India about gender equality, President Obama said this about religious tolerance:

“The peace we seek in the world begins in human hearts; it finds its glorious expression when we look beyond any differences in religion or tribe and rejoice in the beauty of every soul,” the president said. At the conclusion of his speech, President Obama referenced Mohandas Gandhi: “He said, ‘for me, the different religions are beautiful flowers from the same garden, or they are branches of the same majestic tree’. Branches of the same majestic tree.”

Let’s see if, in the heart of someone in the leadership of Saudi Arabia, there is the will to cease the punishment of the young blogger and set him free.—Rick Cohen