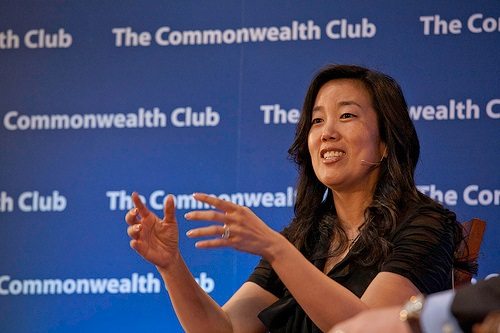 It is important for the nonprofit sector to acknowledge the departure of Michelle Rhee from the school privatization advocacy organization she founded, StudentsFirst. Her public written explanation cited personal reasons: “It’s…time for my next step in life, which will be focused on my family and supporting my husband [Sacramento Mayor Kevin Johnson],” Rhee wrote. “His focus and passion for underserved communities…will be central to whatever comes next for us.” That probably means that KJ, as he was known as a star NBA guard with the Phoenix Suns, has political aspirations higher than Sacramento, boosted by his recent role as the spokesperson for NBA players who were aghast at the continued ownership of the Los Angeles Clippers by Donald Sterling and, more recently, by his election as president of the U.S. Conference of Mayors.

Everyone wishes Rhee well with her focus on husband and family, but her departure from StudentsFirst does create an opening for analysis of what she accomplished at StudentsFirst and where and how she might have fallen short. Although a nominal Democrat, Rhee’s organization provided campaign support to candidates of both parties who favored privatization of elements of the public schools and the diminishment of teachers unions. Rhee drew a great deal of support from private contributors, including privatization-oriented hedge fund moguls such as Romney campaign bundler David Teppler and hedge fund manager Dan Loeb and Democratic foundation leaders such as John and Laura Arnold and Eli Broad (as well as much more conservative philanthropists such as the Walton Family Foundation). She put together a powerhouse board with the likes of Connie Chung, Bill Cosby, former NBA player Jalen Rose, former N.Y. Representative Rev. Floyd Flake, former CNN anchor Roland Martin, and Michael Bloomberg’s chancellor of the New York Department of Education Joel Klein (with Bloomberg himself as a funder of StudentsFirst).

In this brief space, we don’t propose to do a complete retrospective of Rhee’s leadership of StudentsFirst, much less the broader elements of her career, but rather raise some issues that have emerged in the press coverage of her resignation that merit discussion.

Some of the press debate is on whether StudentsFirst can survive without Rhee as its president and CEO. However, reports suggest that Rhee will continue on the board of directors, and the organization is aiming toward hiring another high-profile person as CEO, such as former NBC-TV anchor Campbell Brown, who founded the Partnership for Educational Justice, which challenges teacher tenure laws, and the Parents’ Transparency Project.

Rhee may have less time to devote to StudentsFirst, since she has been elected chair of the board of St. Hope Public Schools, the 1,800-student charter school network established by Johnson. She has also joined the board of Scott’s Miracle-Gro. It may be interesting to note that Miracle-Gro’s company PAC contributed to the election campaigns of George W. Bush in 2004 and Rudolph Giuliani in 2008, though no presidential candidates in 2012, and overall, its contributions to House and Senate candidates over the years have leaned heavily Republican.

Because of slow sales, Miracle-Gro just announced staff layoffs; the number is unspecified, but the news coverage implies that the layoffs will not be inconsequential. Having controversially laid off teachers in D.C. and now closing StudentsFirst offices in five states, Rhee might have a lot to bring to the board of Miracle-Gro.—Rick Cohen