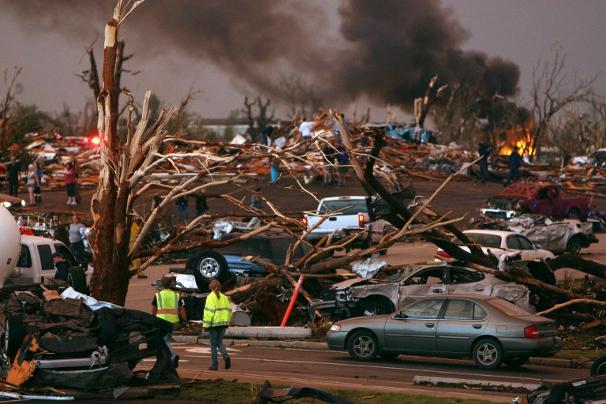 Standing in the midst of the rubble in Joplin, Mo., is St. John’s Hospital – a nine story skeleton surrounded by cars that look like they were picked up and hurled at its walls – testifying to the power of the tornado that ripped the town of 50,000 virtually in half at dinner time on Sunday. Winds that were clocked at nearly 200 miles an hour leveled entire blocks and broke every window in the hospital.

Dr. James Kimmey, president and CEO of the Missouri Foundation for Health, said that as hard as St. John’s got hit, it had an emergency plan in place – as is required of all large health providers. The same is not true of the health-related community-based organizations that the foundation funds that were also decimated by the storm. Said Kimmey, “It’s not in their DNA in the same way.”

In fact, because communications are so spotty since the storm hit, the foundation is still unsure of the fate of some of their grantees – small clinics, domestic violence programs, and behavioral health facilities – that were in the path of the tornado. Since early Monday morning the foundation has tried hard to make sure that all grantees – and even non-grantees – know that they are ready and willing to make emergency grants to them for health related needs.

Kimmey said that one of the ways that the foundation can be of use in the wake of a disaster is by mobilizing itself to act quickly. This way it can act as an immediate bridge to other emergency funding. The foundation’s board has delegated decision making for emergency grant making to a small executive committee and the staff of the foundation, which prides itself on its intimate connections to the communities it funds.

The foundation serves 800 nonprofit grantees across the state but it’s too early to tell how many of them will be coming to the foundation for help. The foundation’s first grant to the Joplin area since the storm hit was approved Tuesday morning to ACCESS Family Healthcare – and it will be paid out within 24 hours.

ACCESS Family Care provides health services to people who lack appropriate health care due, chiefly, to economical reasons, according to its website.

This first grant will be used to feed and otherwise support ACCESS’ volunteers as they work to meet some of the massive medical needs in the area. Approximately 2,000 people are thought to be injured and 117 dead at last count, but the trauma, of course, extends far beyond those numbers. Both Kimmey and Peters point to the inevitable longer term mental health needs that will emerge as people come to terms with their incalculable losses. They understand that the foundation will need to be present for all of the ripples of the storm.

Still, that is not the only disaster that the Missouri Foundation for Health is attending to right now. It is also paid almost $250,000 in emergency funds to organizations working to respond to the effects of the flood in Southeast Missouri, where they have made about 6 grants since floods swept through the region in late April.

Bev Pfeifer-Harms, the Director of Communications at the foundation said, in making such grants, the foundation is “focused on activities directly related to delivering help including the creation of food banks, accessing potable water, proper shelter, fighting increased chance of infections, and access to medications.”

Pfeifer-Harms said that the medications may have blown away and the pharmacies that provided the medications may not eve exist anymore. The accuracy of this account is made painfully clear as reports indicated that some patient records from St. John’s were found in other counties.

Pfeifer-Harms reports that one grantee, a behavioral health facility, lost its building completely. “We haven’t communicated with them yet,” she said, “but we will be helping them find each resident a new place to live and help provide access to the medications each resident needs.”

“Another grantee, a domestic violence shelter, still has its building, but we know they’ll be looking to relocate their clients to somewhere with running water and electricity,” she added. “We are anxiously waiting to hear what else we can do.”

The foundation is making active use of social media to advertise the availability of their emergency grants but because electricity is not available in all areas, it’s hard to know how effective this will be as an outreach strategy at this early stage. The foundation’s health policy team is communicating with elected officials on Twitter to help spread the word.

But Mike Peters, who is on the foundation’s executive committee, said although they are being aggressive in reaching out, it will take time. He said that St. John’s still doesn’t know where all of its staff members are – how many may have perished or fled the area. But some of the staff have been found. According to one newspaper account Monday, dozens of them were working in the triage center St. John’s helped to set up in Joplin Memorial Hall.

The Missouri Foundation for Health, according to Dr. Kimmey, has a tradition of staying close to the ground. It wants to be familiar not just with grantees in the communities they fund but with other key players of all kinds. Ultimately it is through these networks that contact will be made to start the grant money flowing but just to be safe, help them out and tweet today.

More about: Disasters and RecoveryFoundationsPolicySocial Media