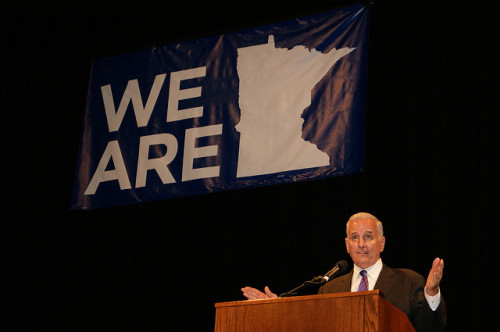 Last year’s census report documented an increase in poverty for black Minnesotans from 2013 to 2014, a rise that was unique among all racial groups. In fact, the poverty rate among African Americans in Minnesota is 4.5 times higher than for whites in that state. Now, faced with a potential $900 million surplus, Minnesota Governor Mark Dayton has produced a $100 million legislative package designed to address persistent racial disparities in that state. The package will include support of discrimination investigations as well as business-development programs, youth employment initiatives and first-time homebuyers. Of the $100 million he is proposing, $34 million still remains for community groups and legislators to make decisions on.

The reactions the measure has drawn show an appreciation for the recognition of the need, but also acknowledge that the size and style of the investment may not make a big difference against deeply embedded structural problems.

State Sen. Patricia Torres Ray (DFL-Minneapolis) has declared the moment an exciting start to a longer-term conversation. “The economic disparities package that the governor proposed is a very significant proposal,” she said. “We haven’t had these kinds of proposals coming from the executive branch in the history of Minnesota.”

Community groups, including the Minneapolis NAACP, the Northside Funders Group, and Neighborhoods Organizing for Change, helped shape the contents of the package. Still, much of the money will be flowing through state agencies, and this worries at least one legislator. Sen. Bobby Joe Champion (DFL-Minneapolis) says those agencies historically have not gone out of their ways to support communities of color:

I really do believe the governor means well, but he’s given two-thirds of the money away to other state agencies that have not proven to have a level of sensitivity around these issues, or a real grasp of how to deal with these issues in real time, in a way that’s gonna make us all proud.

Minneapolis NAACP president Nekima Levy-Pounds said that the programs so far recommended are not targeted enough to be serious. “The racial income gaps in our state will not be solved without concrete, targeted solutions focused on specific populations and addressing their needs,” she said. “If the governor, for example, initiates a jobs program, there needs to be jobs program specifically targeted at the African-American community.”

But others see the glass as half full. “It’s a testament to a lot of the organizing that has happened,” said Anthony Newby of Neighborhoods Organizing for Change. “Communities are coming together across age. You see folks in the Black Lives Matter movement, who are often youth in their teens or early 20s, working with anchor organizations like the NAACP or the Urban League that have an older leadership and constituency base. […] I’m proud of that organizing effort and frankly [Dayton’s budget proposal] is a testament to the governor, who is willing to listen.”—Ruth McCambridge