Money Laundering and Art: Ever a New Twist 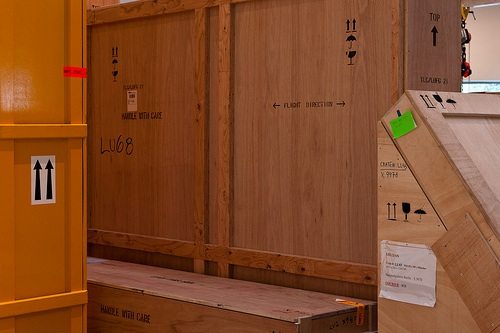 Patricia Cohen writes in the New York Times that art is increasingly being used as a money-laundering device. The article starts with the story of Edemar Cid Ferreira, a Brazilian embezzler who converted some of his ill-gotten gains to art, then sent it to the United States. The Jean-Michel Basquiat painting known as “Hannibal,” valued in the neighborhood of $8 million dollars, was shipped in a crate labeled as having goods valued at $100 inside—and goods worth less than $200 do not need to provide authorities with customs documentation, duty or tax. The painting is one of a 12,000-piece art collection, pieces from which have been exhibited in museums like the Guggenheim. It now sits in storage after having been confiscated.

“In Newark, federal prosecutors in a civil case recently announced the seizure of nearly $16 million in fine art photographs as part of a fraud and money laundering scheme that prosecutors say was engineered by Philip Rivkin, a Texas businessman.

The 2,200 photographs by masters like Alfred Stieglitz, Edward Weston and Edward Steichen—more than could fit into an 18-wheeler—were paid for, court papers say, with some of the $78 million that the authorities say Mr. Rivkin got from defrauding oil companies like Shell, Exxon, and Mobil. Mr. Rivkin, who has not been charged with any crimes, was last thought to be in Spain and had arranged to have the photos shipped there.

In New York, victims of the fraud and money laundering scams of the disbarred lawyer Marc Dreier are still in court fighting over art he bought with some of the $700 million stolen from hedge funds and investors. At the moment 28 works by artists like Matisse, Warhol, Rothko and Damien Hirst are being stored by the federal government.”

Most of the industries more commonly used for money laundering now have checks, but the art market lacks them to date. According to Sharon Cohen Levin, chief of the asset forfeiture unit of the United States attorney’s office in Manhattan, “You can have a transaction where the seller is listed as ‘private collection’ and the buyer is listed as ‘private collection…In any other business, no one would be able to get away with this.”

There have been some attempts to try to stem the use of art for these purposes; early this year, the European Commission began to require that galleries report anyone who pays for a work with more than 7,500 euros in cash and to file suspicious transaction reports. Similarly, the United States requires all cash transactions of $10,000 or above to be reported.—Ruth McCambridge