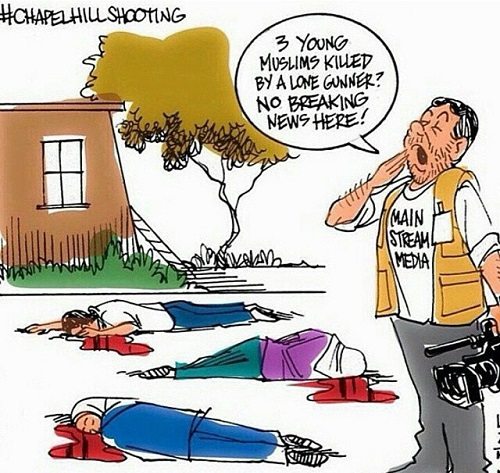 By all accounts, a man in North Carolina shot and killed three Muslim students near the University of North Carolina campus. Charged with the shooting, Craig Stephen Hicks turned himself in to the Durham police. The three victims were all related: 23-year-old Deah Barakat; his wife, Yusor Mohammad Abu-Salha, 21; and her 19-year-old sister, Razan Mohammad Abu-Salha. Barakat was a dental student at UNC, his wife was just about to start her dental studies there, and all three belonged to the Alexandria-based United Muslim Relief. (If you go to the United Muslim Relief page, you’ll see its Dental Relief Arm in collaboration with the Miswak Foundation—one of the reasons why Barakat was so valued by the organization.)

The organization’s founder, Shafi Khan, said that he and his colleagues were broken-hearted about the killings. “These guys were the best of the best,” Khan said. “There’s just no other way to put it.”

A statement from UMR President and CEO Abed Ayoub noted that Deah and Yusor were in the founding team of the UMR chapter in the North Carolina Triangle area and Razan was a current officer of the chapter. Deah had been a volunteer in a dental relief mission to Palestine to treat children with special needs and was working to prepare a dental relief mission to Syrian refugees in Turkey. “Deah, Yusor and Razan showed us the importance of serving others,” Ayoub said in the statement. “UMR will work hard to honor their legacy.”

Given the visibility of these three young Muslim leaders in the UNC area, and given their work with UMR, it is hard to believe that their deaths might simply have been the result of a random shooting. The incident probably warrants investigation as a potential hate crime. We can all honor the legacy of these three young people by demanding justice for them, remembering that #MuslimLivesMatter, and supporting organizations like UMR that carry the values of sterling young people like these three Muslim humanitarian activists.—Rick Cohen