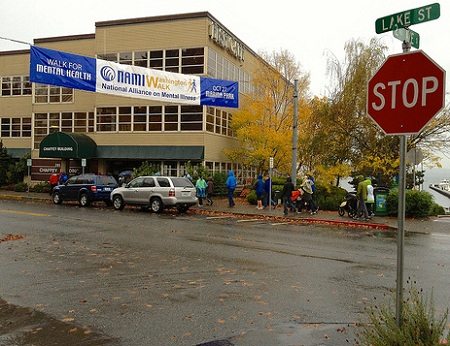 The Nonprofit Quarterly has written quite positively about the work of the National Alliance on Mental Illness, so it made sense to look to NAMI for a framework for understanding the questions of mental illness associated with the alleged shooter in the Sandy Hook Elementary School shootings in Newtown, Conn. The press has been digging into what role, if any, mental illness may have had in the shooter’s decision to use a semi-automatic weapon to kill defenseless children and teachers. Was mental illness reflected in descriptions of the alleged shooter as a “loner,” his lack of full-time employment, his interest in playing computer games, or his living at home with his reportedly survivalist-oriented, gun-collecting mother? Was mental illness the trigger that caused the horrible shootings or was something else at play?

The NAMI statement issued after the shootings mostly deals with making sure that trauma counseling is provided to the families of the murdered pupils and teachers, the survivors of the shooting, and the community. Regarding the shooter, the NAMI statement read, “NAMI will follow news reports closely as more details become known. At this time, there is no indication that mental illness was a factor in the tragedy. It is important to not make assumptions or speculate in such cases. The overall contribution of mental disorders to the total level of violence in society is exceptionally small.”

Supporting the NAMI contention, Richard Friedman wrote in the New York Times, “there is overwhelming epidemiological evidence that the vast majority of people with psychiatric disorders do not commit violent acts. Only about 4 percent of violence in the United States can be attributed to people with mental illness. This does not mean that mental illness is not a risk factor for violence. It is, but the risk is actually small. Only certain serious psychiatric illnesses are linked to an increased risk of violence.” He was writing in reaction to the increasing amount of commentary that is focused on keeping guns from getting into the hands of people with mental illnesses as opposed to getting semi-automatic, military-style guns or large capacity magazines of ammunition out of circulation more generally. Friedman adds:

“One of the largest studies, the National Institute of Mental Health’s Epidemiologic Catchment Area study, which followed nearly 18,000 subjects, found that the lifetime prevalence of violence among people with serious mental illness — like schizophrenia and bipolar disorder — was 16 percent, compared with 7 percent among people without any mental disorder. Anxiety disorders, in contrast, do not seem to increase the risk at all…Alcohol and drug abuse are far more likely to result in violent behavior than mental illness by itself. In the National Institute of Mental Health’s E.C.A. study, for example, people with no mental disorder who abused alcohol or drugs were nearly seven times as likely as those without substance abuse to commit violent acts.”

The White House has signaled that it would also look to mental health explanations and solutions, hoping that gun control legislation will be a counterpart, to reduce the likelihood of future gun violence horrors such as Newtown, Aurora, Tucson, or Columbine. White House spokesman Jay Carney told a press briefing: “One of the reasons why the president explicitly talked about engaging not just with lawmakers and law enforcement officials and educators but mental health experts is because that’s clearly a factor that needs to be addressed in some of these cases of horrific violence.” However, Carney turned the incident into an example of the importance of national health insurance reform, asserting that “Obamacare, if you will, has ensured that mental health services are integral and part of the services that…Americans who will have health insurance because of the Affordable Care Act will receive…without a co-pay or deductible.”

While the Affordable Care Act is a big step up in health care coverage for people with mental illness who can no longer be denied coverage due to preexisting conditions, there’s no indication that the ACA rules eliminate co-pays or deductibles for mental health treatment. NAMI has an excellent fact sheet available on what the ACA will and won’t do for the more than 11 million people with mental illness who are currently not covered by health insurance, but NAMI has had much criticism to offer the federal government regarding how to improve coverage. On co-pays, for example, NAMI has responded to draft regulations regarding health exchanges by recommending, among other things, that co-pays should “count toward the annual limit on cost sharing and deductibles.”

Carney may have overstated his case a little bit, but several commentators are overstating the capacity for mental health reforms to prevent future mass shootings. Mental health needs more attention in general and more coverage via national health insurance, but that won’t stop most mass murders like the one in Newtown. “All the focus on the small number of people with mental illness who are violent serves to make us feel safer by displacing and limiting the threat of violence to a small, well-defined group,” Friedman concluded. “But the sad and frightening truth is that the vast majority of homicides are carried out by outwardly normal people in the grip of all too ordinary human aggression to whom we provide nearly unfettered access to deadly force.”—Rick Cohen