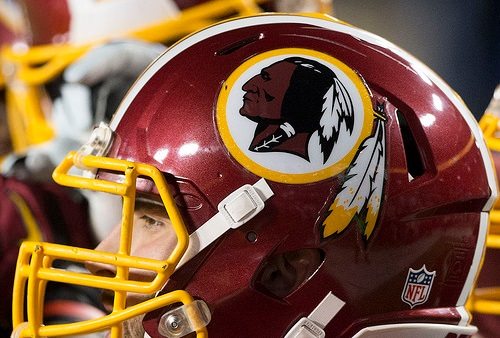 Dan Snyder might be well advised to listen to people in the know, take stock of their message, and accede to changing the racially insensitive name of his Washington, D.C. National Football League (NFL) franchise.

The latest group to take the field against the Washington Snyders is the National Council of La Raza, the nation’s largest Latino civil rights organization. Over the weekend, NCLR’s board of directors unanimously voted to ask Snyder to change the team’s name.

“Our brothers and sisters in the Native American community have been clear and consistent in their call to change both terms and images that they consider demeaning. As an organization committed to fairness and equality for all, NCLR fully supports these efforts,” La Raza President and CEO Janet Murguía said in a statement. “The Latino community well understands that words matter and that they can denigrate, disparage and dehumanize. We should treat all people with the respect and dignity they deserve.”

Last year, the NAACP passed a resolution calling on Snyder to change the team’s name, a position it has taken since 1992. “It is disappointing that this derogatory moniker remains embedded in one of our nation’s premier sporting teams,” said Lorraine C. Miller, who was interim president and CEO of the NAACP at the time, in a press release. “We stand alongside all American Indians who are calling for Washington owner Daniel Snyder to change his team’s name.”

Toward the end of last year, 85 civil rights organizations participating in the annual meeting of the Leadership Conference on Civil and Human Rights, including the NAACP, the AFL-CIO, the American Civil Liberties Union, the Human Rights Campaign, the Anti-Defamation League, and the Arab-American Anti-Discrimination Committee, unanimously called for a name change. Describing the team’s name as treating Native Americans as “less than human,” the director of the NAACP’s Washington Bureau, Hilary O. Shelton, said, “We all hope they change it very soon. There is really no excuse for not doing so.”

“This is not someone else’s problem, this is everyone’s problem,” Wade Henderson, president and CEO of the Leadership Conference, said in a press release. “Having an offensive slur for the Washington team name teaches young people to celebrate the denigration of people for being who they are.”

We are struck, however, by the recollection of Henderson’s observation that the name-change controversy is everyone’s problem. That should be doubly so when the Washington team takes actions that clearly affect other institutions. In this instance, Snyder’s creation of the Original Americans Foundation, with the all-too-transparent purpose of helping the team past this annoying and burgeoning public relations problem, takes the name controversy into the realm of philanthropy. However, the Washington, D.C. area philanthropic trade association, the Washington Regional Association of Grantmakers, and the national foundation trade association, the Council on Foundations, have both so far refrained from taking a position on the team’s name, much less speaking out about the larger purpose of the Original Americans foundation.

It’s time for philanthropy to see the use of a racial epithet as the name of the Washington, D.C. NFL franchise and the creation of a foundation with overtones of winning support for the racially disparaging name as a problem—and not just for Snyder, professional football, and the National Football League. If it really is everyone’s problem, then organized philanthropy ought to line up with the civil rights community and add its voice to the huddle demanding a name change for the Washington team.—Rick Cohen