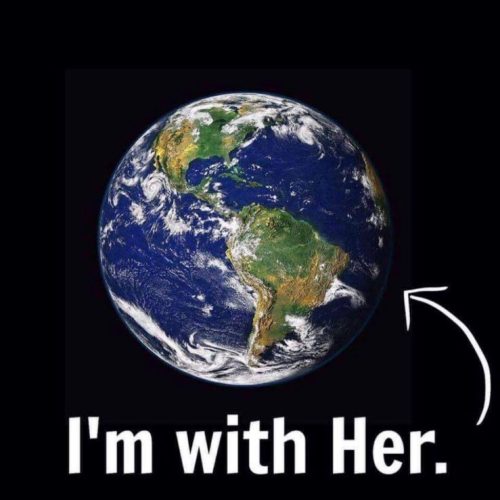 Yesterday, we mentioned the brouhaha around a set of fairly wonky rogue tweets coming from the National Park Service. Last week, Trump’s administration ordered a media blackout for the Environmental Protection Agency (EPA), though he later reversed that decision, and froze the Twitter accounts for the National Park Service after someone tweeted from their account comparative pictures of the crowd sizes on Trump’s and Obama’s inauguration days. (NPS is in charge of the National Mall.) The EPA was also told to take down its webpage dedicated to climate change—another decision later reversed.

Meanwhile, someone at South Dakota’s Badlands National Park began tweeting out facts about climate change—tweets that were later removed, but not forgotten. Other Twitter accounts took over the charge. The messages from the Twitter account billing itself as “The Unofficial ‘Resistance’ team of U.S. National Park Service” caught the attention of the public this week.

Mr Trump, you may have taken us down officially. But with scientific evidence & the Internet our message will get out.

This simple post retweeted by 22,000 people and liked by nearly 42,000 was among 170 from @AltNatParkSer. Many contained scientific facts related to climate change. Soon, the account was boasting well over a half million followers.

All of this is driving environmental scientists to more activism.

“Since the election, there’s been a kind of boom of efforts by scientists to look for ways to constructively engage in anticipation of…what the [president] and others on his team have said about climate change and other issues,” says Peter Frumhoff, the director of science and policy at the Union of Concerned Scientists. “Many thousands of scientists are engaged and energized…by a desire to do something constructive and fear that the worst may be yet to come.”

Sarah Pralle, an associate professor of political science in the Maxwell School at Syracuse University, says that they have been driven to it by the so-called “post-truth climate” of this administration.

“It’s not as though scientists have not been forward and open about sharing their concerns about climate change, their data, and their evidence,” she says. “I think they’ve worked very hard to make it as understandable and clear to both policymakers and the lay public as possible. It’s just that the issue has become so incredibly politicized that one of our two parties refuses to believe the overwhelming evidence.”

Robert Duffy, a professor of political science at Colorado State University, told the Christian Science Monitor, “I think we may have reached a tipping point of sorts in the last year or so, as the very idea of ‘facts’ has come into dispute, providing an impetus for people who had once been reluctant to jump in. We are seeing that many scientists…have decided that it no longer pays to be silent—they will be attacked whether they speak out or not, so why not speak out for what you know is true?

“We’re at the front end of this administration, and none of us know what’s going to happen next,” Dr. Frumhoff says. “But the scientific community and people who care about facts and evidence are watching closely.”

There’s even stirrings of a potential march on Washington for scientists, in the model of the massive women’s march this month.—Ruth McCambridge