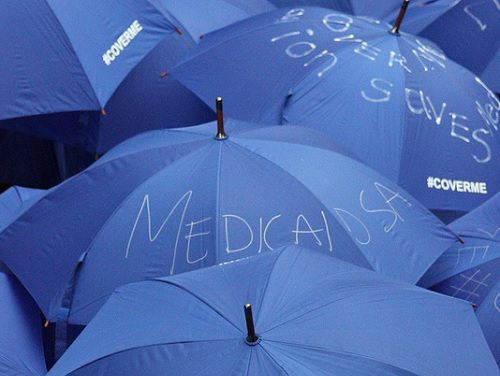 In North Carolina, as in many other Southern states with large rural areas, the governor and legislature have refused to expand Medicaid eligibility. Last month, the Vidant Pungo Hospital shut down in Belhaven, a town of around 1,600 located in North Carolina’s Inner Banks region. The closing was due at least in part to the state’s rejection of Medicaid expansion. Six days after the hospital’s closing, a 48-year-old woman died of a heart attack as she waited in a Belhaven school parking lot for a medevac helicopter to take her to the nearest hospital 84 miles away.

In reaction to the Belhaven incident, the conservative Republican mayor of Belhaven, Adam O’Neal, spent 15 days walking 273 miles to Washington, D.C. to protest the closing of the hospital, which he attributes to an “immoral” hospital operator, and, according to author Dana Milbank of the Washington Post, “the failure of Republican leaders in his state to accept the new Medicaid funding the hospital needed to stay afloat.”

“If the governor and the legislature don’t want to accept Medicaid expansion, they need to come up with another program to assure that rural hospitals don’t close, [else] they’re allowing people to die to prove a point. That is wrong, and I’m not going to be a party to that.” He added, “Rural citizens dying should not be soldiers of the South’s defiance to the new health care law.”

“I’m a pretty conservative guy, but this is a matter of people dying,” O’Neal said.

Milbank’s story took an interest in the conflict some conservatives have with the Affordable Care Act and the expansion of Medicaid eligibility it was meant to include. Medicaid has long been “the backbone of rural America’s health delivery system,” according to the Center for Budget and Policy Priorities. The consequences of rejecting Medicaid expansion can prove troubling—or worse—for small rural communities.

Milbank reports that Portia Gibbs, the woman in the school parking lot, had health insurance, but with no nearby hospital to go to, she died without treatment. The obvious point that opponents of the ACA often overlook is that healthcare reform was meant to increase health insurance coverage and to increase access to healthcare itself. For rural communities like Belhaven, the latter is at risk.

Some opponents of the ACA cite the problem of future cost burdens that states will face if they go along with Medicaid eligibility expansion, though cost questions are a difficult and unsatisfactory response to the death of a 48-year-old woman waiting for a medevac in a school parking lot. Other opponents may be more Manichean in their motivations, opposing Medicaid expansion as part of a political calculus of trying to undermine the Affordable Care Act or simply oppose anything that emanates from the Obama White House.

In the end, it doesn’t matter what the reasons are. When small-town mayor Adam O’Neal, as conservative as they come, treks to the nation’s capital to make a point about the ever-expanding gap between the health services available to rural versus urban Americans, the conservatives in Congress who have opposed national health insurance reform ought to pay attention and rethink what they’re doing.—Rick Cohen