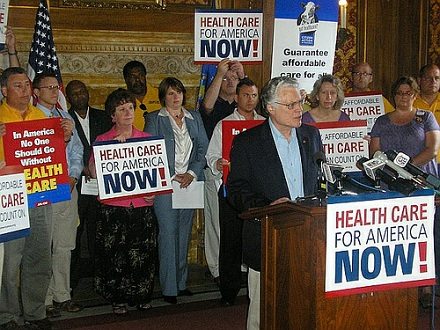 In their analysis of the advocacy behind “ObamaCare,” which they call “a law hated by so many,” David Horowitz and Jacob Laksin have suggested that left-wing advocates distracted the nation from more important issues like the debt crisis and the economic recession. They critique (and sort of admire, too) “the disproportionate capacity of the champions of universal health care on the left, backed by the financial might of progressive foundations, to bring their agenda to bear at the national level” (editor’s note: NPQ published a different take on the health reform law yesterday).

Horowitz and Laksin touch on the positions of the Ford Foundation, the Rockefeller Foundation, and the Tides Foundation in favor of universal health care coverage, but credit the Robert Wood Johnson Foundation, the nation’s largest health-focused foundation, with being the most influential of the funders in favor of the kind of health care reform that the PPACA represents.  But they also take on the influence of “single-issue political coalitions funded by foundations and advocating for universal health care legislation,” focusing specifically on the one they identify as the most successful, Health Care for America Now (HCAN).

Horowitz and Laksin take HCAN to task for its $40 million campaign to promote health care reform. The authors note that HCAN was allied with unions such as the Service Employees International Union (SEIU) and the American Federation of State, County and Municipal Employees (AFSCME). According to Horowitz and Laksin, “as unions’ membership dwindled, they came to see government’s involvement in health care as a lifeline that would turn health care workers into government union members while maintaining their generous pay and benefit packages. But despite HCAN’s $40 million campaign, in the first two years after Congress passed the PPACA, according to a report issued by Kantar Media, critics of the legislation outspent supporters on television ad three to one.

The challenge facing HCAN and others going forward is to take the Supreme Court’s decision and work toward constructing an infrastructure to make the PPACA workable, but advocacy funding for building a program is often harder to come by than funding to promote or oppose a concept or legislation. In demonstration of the fickleness of foundation money, for example, on its Form 990, HCAN’s 501(c)(4) reported total contributions of $19.5 million in the fiscal year that ended in June of 2010, but only $.2 million in the fiscal year ending in the summer of 2011.  As Republicans pledge to now repeal the PPACA in its entirety since the Court passed on killing it on constitutional grounds, HCAN and its allies have a new challenge ahead of them, one that is more granular, more nuts and bolts implementation than arguing for the broad concepts of universal health care coverage.

One of the key funders of nonprofit advocacy on health care reform, bypassed in the Horowitz and Laksin analysis, has been Atlantic Philanthropies, which played the leading funding role in supporting organizations such the PICO National Network ($1.6 million in 2010-2011), the Center for American Progress Action Fund ($300,000 in 2009), the Community Catalyst Action Fund ($1.5 million in 2009 for a state advocacy fund supporting the PPACA) and Community Catalyst ($1.85 million in 2009-2010 for grassroots mobilization), US Action ($10.25 million in 2008), and most significantly, Health Care for America Now ($17 million between 2009 and 2011).

Atlantic’s website doesn’t list any grants to these organizations yet for 2012. Its grantmaking might be more limited, as the president and CEO of Atlantic who initiated most of this grantmaking, Gara LaMarche, has left the organization. Now, Atlantic is rapidly moving toward negotiating tie-off grants with many activist organization as it appears to emphasize faster spend-down giving to major higher education and medical institutions. Will the spending-down Atlantic, without LaMarche at the helm, choose to re-up its commitments to HCAN, Pico, Community Catalyst, and others to make the PPACA work?

To address the societal calamity of millions of Americans without health insurance coverage, HCAN and the foundations that have supported HCAN deserve appreciation for a job well done—in part. They helped get a bill enacted. Now they have to advocate to get a program designed and implemented.—Rick Cohen