New Rules on Hiring Persons with Disabilities: Heads Up, Nonprofits! 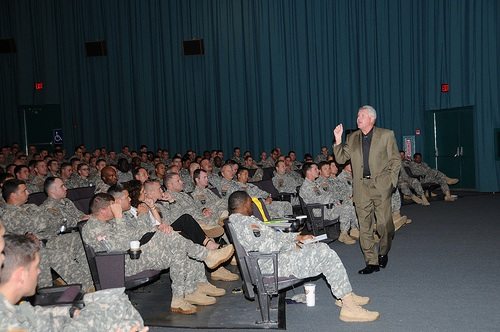 One of the sadder, stupider pieces of immediate press commentary about the Navy Yards killings last week was the almost automatic categorization of Aaron Alexis, the shooter, as a “troubled veteran” with post-traumatic stress disorder (PTSD), although Alexis had never been deployed overseas and his purported PTSD had been due, according to family members, to being a 9/11 responder at the World Trade Center, though there is no evidence that he was ever a 9/11 responder at Ground Zero nor that he ever specifically sought treatment for PTSD.

So some of the collateral damage of Aaron Alexis’s deadly rampage will be among veterans seeking jobs, particularly in the private sector, where employers might arch an eyebrow and move job applicants slightly closer to the do-not-hire pile. This is blatant discrimination, which our society should confront head on and the Department of Labor is addressing through new regulations regarding hiring veterans and hiring persons with disabilities.

Persons with disabilities are the most widespread minority group in the U.S., with membership that includes whites as well as people of color, the affluent, the middle class, and the poor, and people from cities, suburbs, and rural areas—and, due to this country’s prolonged military adventures in Iraq and Afghanistan, a population of veterans who, until one incident or one accident overseas, would never have thought of themselves as disabled and needing assistance or accommodations for finding work in the private sector. Challenges for persons with disabilities may be the civil rights issue that has gotten the least public attention and action in our society.

Last month, the Department of Labor, under recently appointed Secretary Tom Perez, announced a major change in the rules for persons with disabilities that should be considered, if it is pursued and enforced as it should be, a major civil rights triumph. In new rules for Section 503 of the Rehabilitation Act of 1973, Labor now requires that all federal contractors and subcontractors “affirmatively hire 7% people with disabilities to fill each job group” or to the contractors’ entire workforce, if the contractor has 100 or fewer employees. Section 503 is no longer a non-discrimination provision, but a regulation that makes contractors affirmatively try to fill seven percent of job slots with persons with disabilities—which means, in some cases, thinking creatively about the accommodations that might be needed to tap this “largely overlooked source of talent and skill.”

In addition to Section 503, the Department of Labor also required in the Vietnam Era Veterans Readjustment Assistance Act (VEVRAA) for federal contractors to establish annual hiring benchmarks for hiring veterans generally equivalent to the percentage of military veterans in the civilian labor force, or modified due to factors reflecting the contractors’ specific, unique hiring circumstances.

Who protested the modifications in Section 503? To no one’s surprise, government contractors. Did you know that there are roughly 250,000 federal contractors representing 22 percent of the nation’s workforce? The Washington, D.C.-based HR Policy Association hinted at litigation against the new rule and said, in the words of its president and CEO, Daniel V. Yager, “Simply mandating a numerical ‘goal’ for all jobs in all contractors’ workplaces and then requiring employers to invade the privacy of applicants and employees with questions about their physical and mental condition destroys everything companies have done to integrate individuals with disabilities into the workforce in a sensitive, discreet manner.”