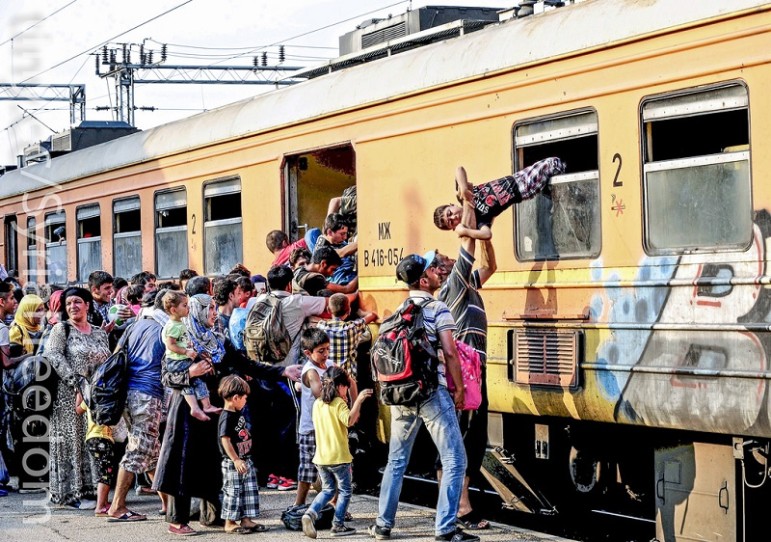 Syrian refugees are now embedded in state political campaigns, too. Picking up on Governor Jindal’s hysteria about two Syrian families in the New Orleans area brought in by Catholic Charities, the two candidates running to succeed the term-limited Jindal, Republican senator David Vitter followed by Democratic state representative John Bel Edwards, called for a halt to Syrian refugees in Louisiana. Largely seen as behind his Democratic opponent in the polls, Vitter was quick to pick up the Syrian refugee issue for political consumption to revive what might have been a flagging campaign.

This is one of those rare moments in history when a humanitarian gesture by the U.S. government has become a divisive political issue. It isn’t hard to see through the veneer of the politicians; this antagonism is not just aimed at bringing Syrian refugee resettlement to a halt, but throwing a monkey wrench into the nation’s entire refugee process, which, if it were allowed to continue, could bring in all of 85,000 asylum-seekers next year, of whom perhaps 10,000 might be Syrians if they were to make it through the vetting process.

It also isn’t difficult to see how this plays into the hands of the terrorists, who are hungry for evidence that secular societies in the West will discriminate against Muslims. Several accounts indicate that the Syrian passport found with the body of one of the Paris attackers was a fake, perhaps a product of the black market in Syrian passports currently thriving in Turkey. The attacker posed as a Syrian refugee making his way through Greece, whose bankrupt government conducts scant vetting of refugees before it passes them along to other countries, not a whit like the in-depth vetting that the U.S. conducts in this country’s refugee program. In fact, the same Turkish forger provided an identical Syrian passport to a man who was just arrested in Serbia. Nonetheless, the knee-jerk reactions of U.S. politicians to victimize Syrian refugees feeds into the apocalyptic worldview of ISIS that their cause is a fight against Christians and other apostates, and the Christian west is out to attack, demonize, and marginalize Islam. These politicians are giving ISIS exactly the sustenance its heinous ideology needs.

Contrast the greater and lesser degrees of hostility directed at Syrian refugees with the absolutely gruesome pictures of dead bodies piling up in mortuaries on Greek islands because local doctors can’t keep up with the paperwork on Samos or have run out of places to bury them on the island of Lesbos. Perhaps more immediate than piles of stored corpses was last week’s news, not covered in the American press it seems, of at least 18 refugees who drowned when their boat sank on the way to Lesbos. Among the dead were seven children. The nationalities of the dead refugees were not immediately known.

It might be surprising to discover that the strongest and most coherent statement explaining the rationale for continuing to accept Syrian refugees was just issued by the libertarian Niskanen Center think tank. In brief, the Niskanen blog post raised several reasons for this country’s openness to Syrian refugees even after the Paris terrorism:

Niskanen also raises a point that we have raised before. Our nation’s openness to refugees in the past has been troubled during different parts of our history. Remember that the U.S. sent 900 Jewish refugees on the S.S. St. Louis back to Europe in 1939 after denying the ship access to ports in Florida, resulting in the deaths of at least 250 of the passengers. Now, many of our leading politicians are going to turn away more refugees who might succumb to the murderous ISIS terrorists.

This is yet another of those issues that nonprofits might hope to dodge as “not their issue,” someone else’s concern and priority, but it’s not. If the U.S. slams the door on desperate Syrian refugees, the nonprofit sector that claims to represent openness, inclusion, and democracy will find its credibility seriously damaged should it fail to do whatever it can to confront the politicians using fear and hatred as a tool for political advancement.—Rick Cohen