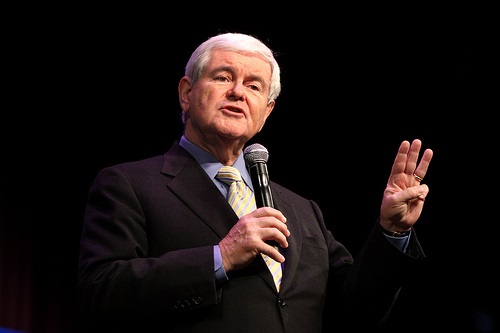 No one can accuse former House Speaker Newt Gingrich of a reluctance to reach for overstatement. Taking off on the Clinton Foundation’s failures to file several years’ worth of Form 990s to accurately reveal donations from foreign governments, Gingrich declared that the Clintons had done something illegal. “My point is they took money from foreign governments while she was Secretary of State. That is clearly illegal,” Gingrich told ABC’s This Week. “This is not about politics. It’s illegal. And it’s dangerous to America to have foreign governments get in the habit of bribing people who happen to be the husband of the secretary of state or the next president of the United States.”

While the Clintons have clearly made a hash out of philanthropic accountability with their fundraising and disclosure practices at the Clinton Foundation, it is philanthropic hypocrisy for Gingrich to declare the foundation’s behavior illegal, with his clearly stated implication that these governments were engaged in bribing a former Secretary of State and potential presidential candidate. It is the classic pot calling the kettle black, given that Gingrich’s legal and ethical problems that ended up having him charged with ethics violations in Congress involved behaviors that directly involved the misuse of foundations.

It is for this reason, Gingrich’s history of the misuse of philanthropy, that his appearance as a closing speaker at the 2015 Council on Foundations annual meeting is objectionable. It is no less objectionable than it was in 2006 when Gingrich, not many years after being dressed down in Congress for ethics charges, was also recruited as a plenary speaker for the Council when the Council was led at the time by former Republican congressman and Gingrich protégé Steve Gunderson.

This year, the motivation is to show the ability to find a common ground in philanthropy between people of differing politics, and what could be better than having the right/left debaters of CNN’s Crossfire show—Gingrich on the right and former Obama advisor Van Jones on the left—finding areas of agreement on charity and philanthropy that the two might not be able to find on scores of other issues. (You can read our coverage of their interaction here.) It’s a good show to get the articulate Gingrich and Jones to close the COF conference, but Gingrich’s track record in philanthropy makes him unsuitable, no matter how good a public speaker he might be.

What was written about Gingrich in the Winter 2006 edition of Responsive Philanthropy still holds value today:

“Gingrich’s track record of philanthropic benevolence in the 1990s earned him several years of serious scrutiny from the Internal Revenue Service and a troubling ethics review by the House Committee on Standards of Official Conduct (back in the days when the ethics committee actually looked, even if halfheartedly, at members’ ethical missteps). That the IRS ultimately let Gingrich off the hook, which Gingrich’s people read as a clean bill of health and his critics read as a highly unusual IRS maneuver, can’t be taken as the end of the story. […]

“The Abraham Lincoln Opportunity Foundation (ALOF) in 1990 [was] a long inactive nonprofit that had been established by high-ranking GOPAC official Howard ‘Bo’ Callaway with the purpose of ‘help[ing] inner-city children.’ At the time, GOPAC was running TV shows to train and mobilize Republican activists, but found the shows too expensive to operate. To save the PAC money, Gingrich endorsed moving the shows lock, stock, and barrel to ALOF, so that they could be financed by tax-exempt charitable donations rather than precious GOPAC political contributions.

“In the words of one expert, ALOF was no more than ‘a slush fund for GOPAC…a shelter for political money.’ Much of this got lots of attention, including a special counsel’s investigation from the House ethics committee, and while Gingrich averred his innocence, he ended up being fined $300,000 and had to acknowledge making several clearly erroneous statements to the committee’s investigators.

“Although the IRS didn’t specifically find Gingrich himself guilty of tax-exempt misbehavior, the IRS did revoke the tax exemption of the Lincoln Foundation in 1998 because of the obvious role the foundation played in ‘how GOPAC…captured and dominated ALOF, using it to raise funds and pay costs for an ambitious cable television show featuring Gingrich. The two groups in essence merged, sharing the same staff, resources, and office. GOPAC went as far as offering its members the chance to pay their $10,000 dues by contributing to ALOF, which provided the donors with the benefit of a tax-deductible expense.’ […]

“At a congressional briefing, Gingrich acknowledged that the ALOF/GOPAC television lectures would be ‘the largest focus group project ever undertaken by the Republican Party,’ but then suggested that the program could somehow qualify as nonpartisan because of the participation of ‘a lot of former Democrats…[such as] Ronald Reagan, Phil Gramm, Jean Kirkpatrick, (and) Connie Mack.’…

“It may be merely a coincidence, but after the 2000 elections that brought George W. Bush to the White House, the IRS found a way of reversing its decision about the Lincoln Foundation as the result of a campaign led by none other than GOPAC’s Bo Callaway, who was also unhappy that his own personal foundation had lost its tax exemption because it had improperly contributed to ALOF.

“In the wake of the Bush election, Callaway got the then-barely known ‘independent review office’ of the IRS, established to respond to citizen complaints, to review the ALOF and Callaway foundation issues. Callaway’s people presented their evidence to the IRS, but the review office made no attempt to contact the House ethics committee that investigated Gingrich and ALOF and uncovered the partisan nature of the foundation’s operations. The special counsel for the committee, James Cole, was surprised by the IRS reversal, saying, ‘Based on what we found about ALOF, if that’s not political and partisan, then I don’t know what is.’ Other observers suggested that this IRS reversal had the earmarks of a political decision. Fran Hill, a University of Miami tax law professor, called it ‘an extraordinary decision,’ noting that it ‘wouldn’t be the first time there was political influence going on at the IRS.’

“The core of the Progress and Freedom Foundation (PFF) controversy is similar. PFF was directed by GOPAC Executive Director Jeffrey Eisenach, who was recruited out of GOPAC to the foundation (though GOPAC paid a chunk of his initial salary) to initially raise tax-exempt money for Gingrich’s multipart ‘renewing American civilizatio