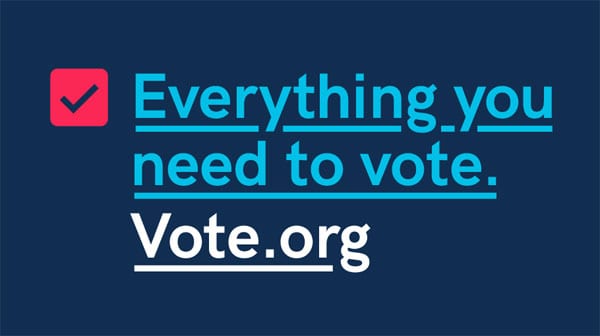 As the mid-terms approach, an array of national nonprofit groups is working with corporations to encourage and facilitate voting. With such a good base upon which to build, the campaign appears to be going fairly strong.

In some cases, the for-profit corporations have developed their own internal promotions. Tyson Foods has been facilitating registration and providing information to its workers. Restaurant chain Cava is providing two paid hours off to vote on Election Day, and Levi Strauss & Co. has volunteer “voting captains” in its locations to help register and inform voters. And, while these measures are nothing brand-new, the nonprofits working with them say that their creativity and enthusiasm have ramped up considerably. Vote.org’s ElectionDay.org project has engaged 250 employers, including Pinterest, to offer some kind of paid time off or flexible leave to enable voting. Democracy Works’ TurboVote Challenge reports that the number of participating corporate partners has more than doubled this year.

Mike Ward, TurboVote’s program director, comments, “The enthusiasm from our corporate partners is exceptional for a midterm election…honestly, if you had asked me in March 2016 what we expected to be happening in October of 2018, I would have expected way, way less.”

More than 135 employers, including Walmart, Gap Inc. and Farmers Insurance, announced in September a “Time to Vote” campaign aimed at increasing awareness about what employers can do to allow time for employees to vote. It followed a call in June by Rose Marcario, the chief executive of outdoor retailer Patagonia, which grabbed headlines for closing its stores and giving workers paid time off for 2016’s Election Day—something it will do again this year—and has been encouraging other employers to follow its lead.

Colette Kessler, director of partnerships for Vote.org, says corporations often tailor their vote-facilitating policies to their context: “The shift I’m seeing is an interest in really understanding what do they provide, what are the holes in their states’ laws they can make up.” For instance, in Minneapolis, where people already have the right by law to take off time to vote, one employer is giving its workers a half-day off. One wedding planning organization has simply declared Election Day a “no-meeting” zone.

“I think the energy that’s coming from employees is helping companies dive in a little bit faster than they have in the past,” says Ashley Spillane, an advisory board member to the Civic Responsibility Project, a nonprofit project of the New Venture Fund that supports businesses focused on increasing civic participation.

Meanwhile, there are plenty of other efforts afoot. Vote.org has installed more than 2,500 VOTE billboards in nine states. Raven Brooks, Vote.org’s chief operating officer, says, “We believe we can elevate the message of voting by doing the same thing big corporations do,” adding that Vote.org experimented with the tactic in 2017 in Virginia and in the special election in Alabama. Since voter turnout was higher in places where the signs were installed, they began to raise additional money for the midterms.—Ruth McCambridge