Nonprofit Association Weighs in with White House on ACA Messaging 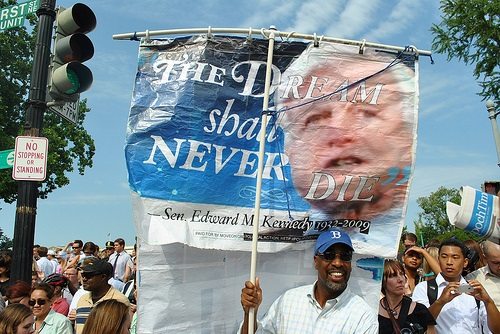 This brief blog entry from the Nonprofit Roundtable of Greater Washington was interesting on at least two points. The new executive director of the Roundtable, Diana Léon-Taylor, recounted her meeting with senior White House aides, including Senior Advisor Valerie Jarrett and Domestic Policy Director Cecilia Muñoz at a meeting of the “Common Purpose Big Table.”

The first thing that struck us was her comment that she got lots of attention and buttonholing time, followed by an invitation to participate in a briefing with President Obama on the Affordable Care Act, once she mentioned that the Roundtable had over 300 members. It’s kind of simple; policymakers want to talk to nonprofit leaders who can, in theory, reach and mobilize numbers of members. Sometimes nonprofits get caught up in trying to craft questionable calculations of their economic value in terms of employment and money, but those numbers pale in contrast to employment in the corporate and governmental sectors. But when nonprofits remind policymakers that they are—or, perhaps, can be—the intermediaries for reaching out to and conveying the voices of hundreds or thousands of organizations and the communities they serve, decision-makers in the White House and on Capitol Hill perk up their ears. That’s the latent power of the nonprofit sector. It is a fundamental instrument and expression of America’s core democratic values. It’s a power that has to be used.

The other interesting thing was the venue, which Léon-Taylor called the “Common Purpose Big Table.” She said it is a “weekly meeting bringing together progressive leaders with White House senior staff in an effort to collaborate on effective public policy messaging,” almost a word-for-word description of the mission statement of the 501(c)(4) Common Purpose, except that she added, “with White House senior staff.” The fact that a meeting with the President on the ACA was the immediate follow-up makes sense, given the poll numbers released yesterday. According to a CBS News poll, 36 percent of Americans want to keep or expand the ACA, but 39 percent want to repeal it. The poll said that 54 percent of Americans “disapprove” of the new health insurance law and only 36 percent approve. A similar Wall Street Journal/NBC News poll found only 34 percent of Americans thinking that the ACA is a good idea, though a majority of poll respondents thought that Congressional Republicans should cease their continuing attempts—now at 40—to repeal the law.

It isn’t clear what kind of messaging it will take to turn the tide on the ACA, though the airwaves have been awash with paid ads trying to sell the public on the benefits of the law, nor what it will take to stop Republicans from their incessant repeal votes. Even though Americans’ support for Congress has never been lower (disapproval of Congress in the WSJ/NBC poll was at 83 percent), Republicans will find more ammunition in the polls to keep going. According to the WSJ/NBC poll, 19 percent of Democrats support Republican efforts to block the implementation of the ACA. In one of the many Republican votes to knock the legs out from the law this month, 35 Democrats joined House Republicans in voting to delay the employer mandate and 22 the individual mandate, the vote seen by the White House as a none too subtle effort to scuttle healthcare insurance reform.

Our guess is that the pro vs. anti deadlock on the ACA is going to continue as-is, like immovable trench warfare, until the program gets underway in 2014, with Americans hopefully seeing greater choice in health insurance coverage on the exchanges, lower premiums due to increased competition, and movement from the administration to get parts of the law like the employer mandate implemented as soon as possible. But if nonprofits want to have a voice, they have to do two things that Léon-Taylor did: cite their numbers in terms of who they represent and whom they connect to, and get a seat at the table so that key decision-makers hear what’s on the minds of nonprofits and the communities they serve.—Rick Cohen