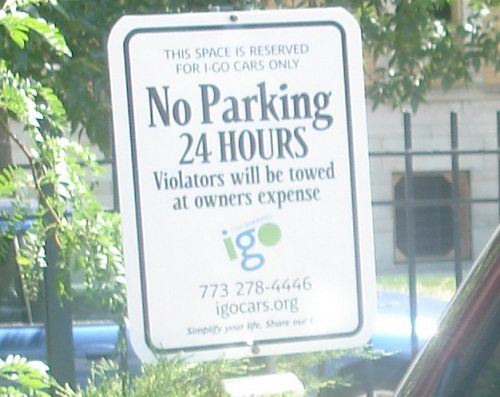 It’s consolidation time in the car rental industry. Avis purchased Zipcar for $500 million, and now we have learned that Enterprise Holdings will purchase IGO CarSharing. With its ownership of Enterprise Rent-a-Car, National Car Rental, and Alamo, Enterprise is the largest car rental firm in the nation.

What makes the IGO acquisition interesting is that IGO, established in 2002, emerged from a pilot program of the nonprofit Center for Neighborhood Technology in Chicago. IGO itself is a nonprofit, and presumably will become part of Enterprise’s for-profit rental-car world.

The sale to Enterprise may have been an issue of scale. IGO has 15,000 members, all located in a single metropolitan area—Chicago. Zipcar, on the other hand, operates in 20 cities and has 775,000 members. IGO CEO Sharon Feigon believes  that, as a nonprofit, it would be harder to grow. “Originally when IGO started, there was this idea that we always wanted [the concept] to be adopted by the private market and grow to scale.…Our idea was always to grow to scale. What we learned over last couple of years was that it is not that feasible to grow to scale as a nonprofit.”

Nonprofits have been motivated to pilot these now-successful enterprises to promote alternatives to traditional forms of transportation. Emily Badger, the author of this article in The Atlantic, states, “They can experiment with ideas that might not make money, like expanding service to low-income residents, or integrating it with public transit, or structuring it around electric cars.” But IGO was willing to sell a program with a successful financial model to fund new experiments. This may have benefits (like capital to bring the program to scale) but it may also have downsides, as Badger points out:

“We don’t yet know whether Avis, or Enterprise, or any other for-profit company will ultimately focus as much on these goals that have less to do with the bottom line and more to do with transportation equity and environmental impact. Until now, for example, IGO has enabled members to use debit cards in addition to credit cards, a crucial logistical detail for bringing low-income users who may not have credit cards into a car-sharing system. Enterprise previously acquired the nonprofit PhillyCarShare, which had a similar option. But Enterprise now requires credit cards in Philadelphia.”

She also points out that IGO’s partnership with Chicago’s public transit agency means that IGO members, of which there are more than 10,000 are able to use one smart card to access both systems, reinforcing a system of alternatives that includes a number of modes of transportation.

Although the terms of the acquisition haven’t been released, some portion of the funds will be used to pay the Center for Neighborhood Technology back on its original investment, with any funds remaining to be used by the former-IGO entity now known as Alternative Transportation for Chicagoland Inc. for its programs aimed at making Chicago easier to live in without a car. Meanwhile, Kathy Tholin, CNT’s CEO, says they are on to the next experiment. “This is such a fast-changing world of innovation, we’re taking stock of where we can have the most impact. We are interested in peer-to-peer car-sharing, and we will be engaged in some form in its development.”

Drawing on IGO’s 990s, we can piece together some of IGO’s finances that Enterprise will assume:

Although IGO has clearly been working on improving its financial position, it was still operating from a pretty significant hole in terms of net assets, which, as of 2011, included $435,000 still owed to the Center for an intra-company loan. The Center  made a grant to IGO of $104,000, which may explain why it appears that IGO turned the corner that year.

While the Center for Neighborhood Technology generated IGO as an affordable model of transportation without the need for individual car ownership, that nonprofit purpose might be hard to maintain as part of the Enterprise empire, which is in competition with Avis (Zipcar) and Hertz (which also developed a car-sharing subsidiary). Presumably, Enterprise will establish for-profit status for IGO, since Enterprise’s existing car-sharing operation is structured as a for-profit.—Rick Cohen and Ruth McCambridge