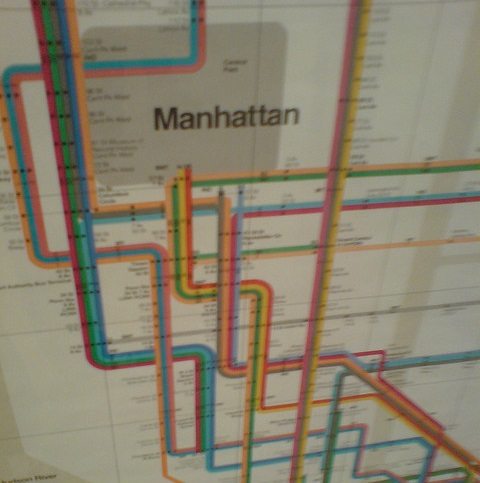 “It is to decrease the amount of vulgarity in the world. It is to make the world a better place to be. But everything is relative. There is a certain amount of latitude between what is good, what is elegant, and what is refined that can take many, many manifestations. It doesn’t have to be one style. We’re not talking about style, we’re talking about quality. Style is tangible, quality is intangible. I am talking about creating for everything that surrounds us a level of quality.”  –Massimo Vignelli, on design

Due to the work of a nonprofit called Publicolor, the students that attend the Bronx Design and Construction Academy will have the rare good fortune to spend their in-school time in an environment painted in a bright palette created by the renowned modernist designer Massimo Vignelli. Vignelli is famous for his assertion that if you can design one thing you can design everything.

Since the 1990s, Publicolor has worked with students to beautify 155 schools and 175 other community locales but this is the first time that the group has worked with a world-class designer. Among other things, Vignelli is famous for his 1970s-era map of the New York subway system.

Publicolor has a contract with New York City’s Education Department to paint 10 schools a year, though it raises additional funds and gets the paint donated. The program is also used to introduce students to the disciplines of the world of work. Compared to their peers, the students in the program have much better rates of staying in school and graduating not only from high school, but from college as well.

Usually the students choose the colors for a space they will paint, but in this case, Vignelli chose the colors that would cover the walls, which were previously a drab tan. He chose vivid colors with names like “desert sunset,” “hot lips,” “orange sky,” “apple crisp,” “lucky charm green” and “salsa.”

This editor is a big fan of Vignelli, who has demonstrated a remarkable ability to design everything from furniture to documents and iconic packaging to airline logos. There is something instructive in his method of using his work to teach these students about the transferability of skill and inspiration from one venue to another. This writer is more than a little jealous. –Ruth McCambridge