A Nonprofit Hosts Rep. Paul Ryan (and a Crowd of Protesters) in R.I. 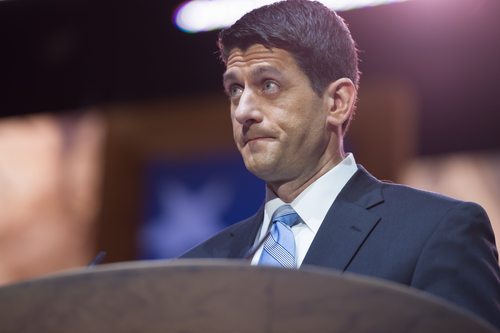 Visits by politicians with nonprofits at their sites are not by any means unusual, but they may currently be even more charged than would normally be the case.

U.S. House Speaker Paul Ryan (R-WI) took a meeting yesterday with the Providence office of Year Up, a national nonprofit career training outfit. Evidently, he went in the back way, because there were 200 protestors in front of the building.

“We want him to hear loud and clear that his values are Wall Street values, they’re not Rhode Island values,” said Georgia Hollister Isman of Rhode Island Working Families. “We’re also here in solidarity with our friends in Wisconsin who’ve been trying for months to get a town hall meeting with him.” Indeed, some signs read, “Hey! Wisconsin, we found him!”

The rally, organized by Rhode Island Working Families and Resist Hate RI, also included a “Paul Ryan, Phone Home” event, where callers in the crowd FaceTimed with constituents in Ryan’s home state. Rally participants shouted out the Wisconsinites’ comments over a bullhorn.

Ryan’s home-state constituents want him to attend a Town Hall meeting there. Ryan has declined to do so, so hundreds of Kenosha, Wisconsin, residents held a town hall meeting without him Sunday and directed their remarks to an empty chair, according to media reports.

One of the participants in the rally said that it had almost 50,000 people watching on Facebook Live.

“No matter where he goes, wherever he takes his radically dangerous Ryan-Trump agenda, the resistance will be there to meet him,” said State Rep. Aaron Regunberg.

The protesters made it clear that their argument was not with the national nonprofit, but as the Associated Press points out, Paul Salem is their board president, and Salem is with Providence Equity Partners, which gave more than $700,000 “to groups associated with the Republican Party and candidates in the 2016 election cycle.”—Ruth McCambridge