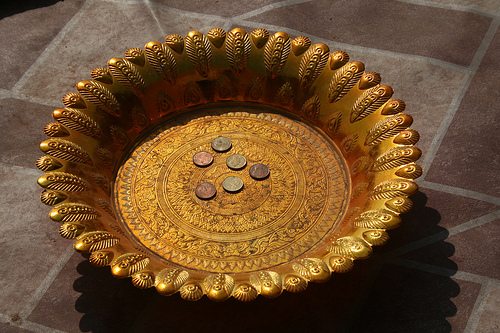 Is the Catholic Church’s recent intensive campaigning on social issues taking a toll on its relationships with secular nonprofits? The Boston Globe reports that the Chelsea Collaborative decided to return a $40,000 grant from the Catholic Church because of restrictions regarding working with people and organizations supportive of gay rights.

Nothing in that list jumps out at anyone as specifically focused on LGBT populations and issues, and the Collaborative has received funding from the Catholic Campaign for Human Development (CCHD) many times in the past for its immigrant and public housing organizing activities. The executive director of the Collaborative, Gladys Vega, says she has long understood that they weren’t supposed to “promote” policies that contradicted Catholic teachings, but that wasn’t an issue with its immigrant and public housing organizing.

This year, during a site visit, a CCHD representative apparently took the opportunity to lecture Collaborative staff about the need to avoid “activities that might ‘support the gay lifestyle.’” According to Vega, the representative told staff and community activists to avoid work “involving the gay community.” That didn’t go over well. Vega herself had received an award from MassEquality for defending a transgender individual who had been beaten up outside a Chelsea, Mass. bar. The Globe reports that Vega “feared that sort of advocacy could be considered unacceptable by the church.”

So the Collaborative returned its current grant and withdrew its pending application for a new grant. A grants specialist with CCHD said that this was all a misunderstanding, indicating that the CCHD works with organizations that may have different beliefs than the Church on LGBT issues. In an e-mail shared by the Collaborative, the CCHD representative stated that, while supporting a gay pride march would not be acceptable, defending gay people against housing discrimination or school bullying would be okay.

That leaves a lot of gray area in the middle. Vega told the Globe that the Collaborative raised other hypotheticals such as whether it could provide health benefits to an employee’s same-sex spouse or whether it could advocate for employees who faced discrimination due to sexual orientation. According to Vega, the CCHD representative suggested that these issues should be posed to local church authorities first; as she put it, “in order for us to do a campaign against the assault of a transgender woman we need to check with the archdiocese or consult a local priest. That didn’t sit well.”

Conservatives such as Michael Hichborn, director of the Defend the Faith program at the American Life League, argues that groups like the Collaborative could be kept very busy simply “feeding the hungry, clothing the naked, and sheltering the homeless” without having to get involved in LGBT issues. Such a perspective fails to grasp that social justice is about more than providing social services. As demonstrated by the Collaborative’s array of organizing efforts, social justice also involves human rights and human dignity, which cannot only be afforded to people who aren’t gay.—Rick Cohen