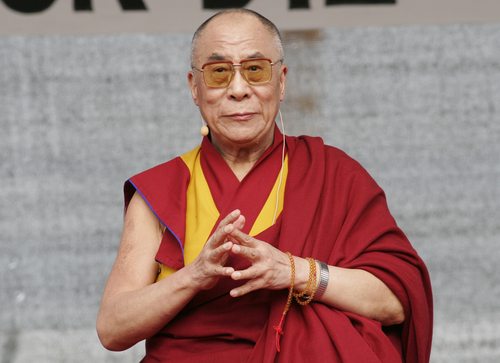 Clearly this is quite the first endeavor for a start-up that incorporated less than three months ago, which made us wonder how the One World Community Foundation managed to assemble this A-list group for their first forum.

Syracuse University trustee and philanthropist Samuel G. Nappi, the founder of electric power generation company Alliance Energy and the socially conscious film company World Harmony Productions, founded the One World Community Foundation. Nappi has also had his hands in multiple nonprofits in the past such as The Dr. Martin Luther King, Jr. Center for Nonviolent Social Change, the National Security Initiative, the Strategic Public Diplomacy Project and the Environmental Media Association in L.A. According to the Syracuse Post-Standard, the university says that Nappi requested the Dalai Lama visit the college when he met with the spiritual leader’s peace emissary while traveling in India. Once the Dalai Lama was on board, NPQ suspects it wasn’t very hard for the new community foundation to attract other prominent figures advocating for human rights.

The forum agenda includes a discussion of the Arab Spring and a talk by the Dalai Lama on conflict resolution. On the community foundation’s website, Nappi says the two-day event will ask “us all to remember our common origins, to respect our religious and cultural differences, and to recognize our shared compassion and humanity.” Proceeds from the event will go to support international relief efforts and funding for a new scholarship in the name of Bassel Al Shahade, a Syrian Syracuse graduate who was killed while filming a documentary on violence in his homeland. –Aine Creedon