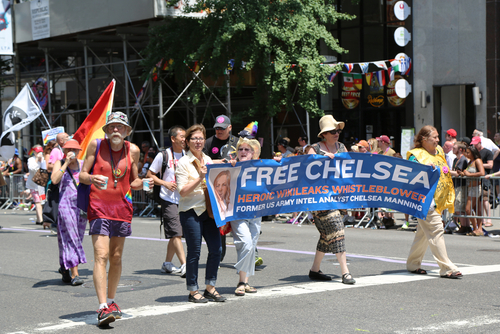 In light of the Justice Department’s intrepid efforts to impose long prison sentences on public-spirited whistleblowers while letting former CIA director Gen. David Petraeus off the hook for his less than public-spirited disclosures to his mistress, it is worth noting that the Supreme Court in January delivered a whistleblower ruling that was positive and important for journalists and for nonprofits concerned about freedom of speech and the tenets of democracy.

Kimberly Chow, an Ethics and Excellence in Journalism Foundation fellow at the Reporters Committee for Freedom of the Press, penned an article about the January SCOTUS ruling concerning whistleblower Robert MacLean, a federal air marshal whose revelations to an MSNBC reporter eventually wound up as a Supreme Court case. In 2003, MacLean became concerned when, due to Transportation Security Administration cutbacks in 2003, the agency announced that no marshals would be on overnight flights from Las Vegas in July and August of that year, despite Department of Homeland Security warnings of threats of terrorist airplane hijackings at that time. Alarmed, MacLean tried and failed to get TSA supervisors and administrators to understand the danger of the agency’s decision. After that, he told an MSNBC reporter about the situation, which elicited concern from members of Congress, prompting the agency to reverse its decision about Las Vegas flights. When the TSA discovered that MacLean had been the source of the leak, he was fired for having disclosed sensitive security information without authorization—a TSA regulation. The Court ruled in favor of MacLean, saying that federal agencies can’t simply enact regulations that insulate themselves from federal statutes that protect whistleblowers.

“In reinforcing the federal protections given to whistleblowers, the Court recognized the valuable role whistleblowers play in holding the government accountable,” Chow wrote. “By extension, the news media that reports on their disclosures also scored a victory.”

In taking the case to the Supreme Court, MacLean was represented pro bono by Neal Katyal, a partner at Hogan Lovells and a former acting U.S. Solicitor General. “The MacLean decision recognizes that the media can and does play an important role in uncovering government corruption, abuse, and, frankly, inanity,” Katyal said about the SCOTUS ruling. “This is a first-rate example of how the media helped get Robert MacLean’s message out and potentially stop a catastrophic decision to remove air marshals at a time of high terrorist threat.”

Given the selective enforcement of the laws, comparing the Petraeus case to the prosecution of former CIA operative John Kiriakou, who just got out of prison for serving just about two years for leaking information about American waterboarding torture practices, and the threatened prosecution of Edward Snowden, the MacLean case is a step forward. At least it says that federal agencies cannot simply circumvent federal whistleblowing protections by generating anti-whistleblowing regulations like the TSA’s. Now the next step is for nonprofits and journalists to remind the Obama Administration that if it is going to let Petraeus walk for his indiscretions, which had no public interest purpose, the White House should seriously rethink its intransigent stance on whistleblowers like Kiriakou and Snowden, whose motivations were quite different from Petraeus’s—and much more in line with MacLean’s.—Rick Cohen