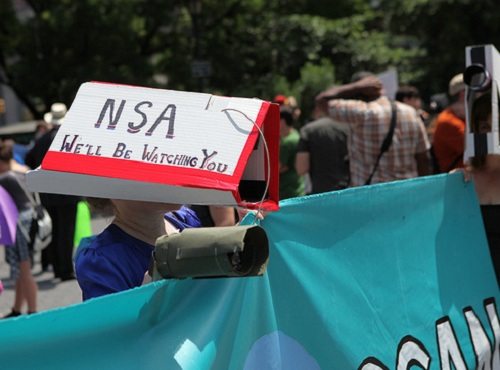 “Without the right of privacy, there is no real freedom of speech or freedom of opinion, and so there is no actual democracy…without respect for [a nation’s] sovereignty, there is no basis for proper relations among nations.” So said Dilma Rousseff, President of Brazil, recently regarding our country’s surveillance of other friendly nations. She added that America’s spying efforts pose a threat to democracy throughout the world, and has proposed that the United Nations establish legal guidelines to prevent “cyberspace from being used as a weapon of war.”

Would that citizens and residents of this country were as vigilant about the threat that unfettered surveillance poses to our freedoms and guaranteed privacy. Why are we not hearing more protest from the right, as well as the left? A New York Times article on Saturday revealed that he National Security Agency (NSA) has been very busy mapping on graphs the social connections of Americans.

The NSA has taken advantage of an authorization to conduct “large-scale graph analysis on very large sets of communications metadata without having to check foreignness” of email addresses, phone numbers, etc. It is using bank codes, insurance information, Facebook profiles, passenger manifests, voter registration rolls, GPS location information, property records and unspecified tax data, and the NSA has declined to say how many of us free people are being graphed in this way.

An NSA spokeswomen said that the legal underpinning of this activity is “a 1979 Supreme Court ruling that Americans could have no expectation of privacy about what numbers they had called. Based on that ruling, the Justice Department and the Pentagon decided that it was permissible to create contact chains using Americans’ ‘metadata,’ which includes the timing, location and other details of calls and e-mails, but not their content. The agency is not required to seek warrants for the analyses from the Foreign Intelligence Surveillance Court.”

The information allows for the identification of friends and associates, for tracking the locations of people at any particular time, for determining religious or political affiliations, and for other sensitive information, like regular calls to a psychiatrist’s office, late-night messages to an extramarital partner, as well as any exchanges with ne’er-do-wells.

“Metadata can be very revealing,” said Orin S. Kerr, a law professor at George Washington University. “Knowing things like the number someone just dialed or the location of the person’s cellphone is going to allow them to assemble a picture of what someone is up to. It’s the digital equivalent of tailing a suspect.”

And apparently this collected data-mapping of your life can be kept for up to ten years, just in case anyone wants to make use of it.—Ruth McCambridge