Nun Advocates for Greater Role for Women in Catholic Church 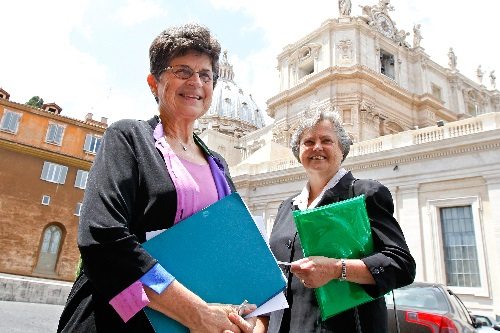 On Sunday night, Sister Pat Farrell, the past president of the Leadership Conference of Women Religious (LCWR), went on “60 Minutes” to discuss the need to expand the role of women in the Catholic Church. The LCWR represents 80 percent of America’s 57,000 nuns.

As NPQ noted last year, the Vatican’s Congregation for the Doctrine of the Faith (the body renamed to distance itself from its role in the Inquisition in the 12th century) has been investigating the LCWR, finally appointing an overseer in Seattle Archbishop J. Peter Sartain. Sartain tells CBS’s Bob Simon that he does not approve of the outspokenness of the nuns, though he does concede that they work very hard.

“In the context of the Church, we’re always going to have the concern about being faithful to Christ,” says the archbishop. “And all I can say to you, Bob, is I don’t have any doubt about the reason why the Holy Father has asked me to do this, which is his genuine love and concern for religious women.”

So, it is apparently for their own good that women religious be kept silent. But Sister Pat comments, “I don’t know, but it feels to me like fear. What would happen if women really were given a place of equality in the Church?” –Ruth McCambridge