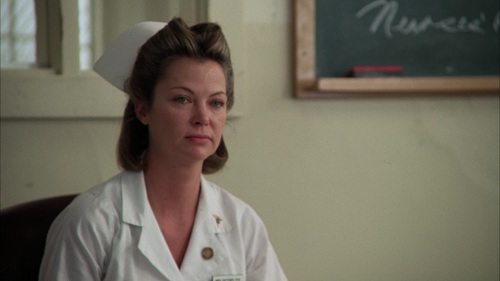 Nurse Ratched’s line, “You know Billy, what worries me is how your mother is going to take this” has to be one of the most excruciating in film history. In fact, the character played by Louise Fletcher was named the fifth greatest villain in film history by the American Film Institute.

Oregon State Hospital was the site where the film based on Ken Kesey’s novel One Flew Over the Cuckoo’s Nest was filmed in the 1970s. Now a portion of that hospital, dating back to 1883, has been turned into a Museum of Mental Health. The exhibits include a straitjacket and other restraints and a steel examination table.

A photograph of the dread Nurse Ratched hangs on a wall “near a television that blares the movie itself on a continuous loop showing the movie’s patients watching that very television, which was retrieved from a hospital trash bin and saved after the filming ended.”

The author of this article writes that in “its early days, the museum’s records suggest, there was no pattern to admissions at all. Alcoholics, dementia patients, syphilis sufferers and others given the catchall diagnosis of ‘mania’ were all taken in. And for part of its history, in the early 20th century, a majority of patients were women, at least a few of whom would occasionally leave for visits with their families.” Based on this evidence, museum volunteers suggest that the hospital may have acted as a place to shelter domestic-abuse victims.

Now 96, Dr. Dean Brooks— the man who played the role in the film of Dr. John Spivey in Cuckoo’s Nest and the hospital’s real superintendent at the time of the movie’s filming—wants people to think hard when they look at back with horror on the practices of mental hospitals of the past. At least, he points out, there was a place that purported to treat people then, whereas prisons are now acting as the default holding mechanism for people with chronic mental-health issues. “Three-fourths of all mentally ill people are in jails or penitentiaries,” he said.

NPQ has written repeatedly about the numbers of people with mental illness in prisons and jails . The entire scheme of treatment for mental illness is in flux right now. Advocates still struggle to get the Mental Health Parity Act implemented, and mental-health funding has been cut in many states over the period of the recession. Dr. Brooks is on the money when he calls the public to look carefully at the horrors of our current system of confinement for people with mental illness. –Ruth McCambridge