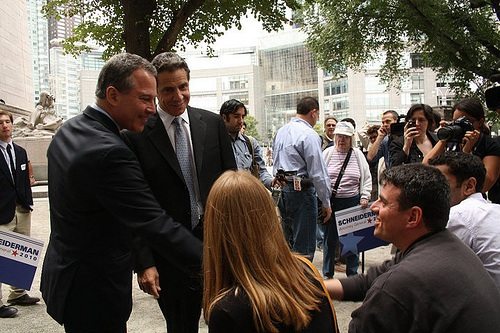 New York State’s energetic attorney general, Eric Schneiderman, writes in the Times Union that the IRS scandal around the targeting of conservative-leaning 501(c)(4) groups has overshadowed the more important issue of “dark money” groups. The law, if the IRS were enforcing it correctly, does not “allow any ‘social welfare’ organization—right, left, or center—to spend funds for partisan political purposes, at all.” He notes that his staff in the AG’s office observed that lots of 501(c)(4)s in New York were putting big money into political campaigns. Why aren’t they functioning as Super PACs rather than (c)(4)s? “The only reason for a wealthy individual or corporation to spend money on elections through a nonprofit [501(c)(4)] front group, instead of a Super PAC, is to take advantage of the fact that nonprofits can conceal their donors.”

Although Congress hasn’t been able to gin up any action on this issue, individual states are acting. Schneiderman points to New York State’s new law, operational as of last week, that requires “nonprofits that spend more than $10,000 on state and local elections to disclose who funds these efforts and how they spend the money.” We presume, however, that the New York statute only applies to 501(c)(4) political spending on New York state or local races. The ultimate 50-state solution is still the province of Congress and the White House, but both have been well-heeled beneficiaries of dark money and show little indication of an interest in much fuller disclosure.

Not all states are following New York’s lead. In Texas, Republican governor Rick Perry vetoed a bill introduced by Republican state senator Kel Seliger that would have required 501(c)(4)s in Texas to report contributions exceeding $1,000 and political expenditures over $25,000. Perry rationalized his veto by referring to the IRS scandal: “At a time when our federal government is assaulting the rights of Americans by using the tools of government to squelch dissent, it is unconscionable to expose more Texans to the risk of such harassment, regardless of political, organizational or party affiliation.” Interestingly, Seliger’s aim in the bill was an attack on “money laundering in Texas elections.”

Schneiderman and Seliger are on to something. Dark money is taking a toll in state and local elections as well. The money is obtained, ostensibly, for use “primarily” for social welfare activities (though the legislation says “exclusively”), but it’s raised through secret sources and converted into a legal structure of 501(c)(4) political spending in a kind of case study of how money laundering works.

Campaign finance is a mess in this country, but it’s worse at the state and local levels than at the federal. This is due not to only less intensive scrutiny, but because of the prevalence of “pay-to-play” schemes, in which campaign donors can give to politicians who might have oversight of policies, grants, and contracts that affect the donors’ business interests. The bipartisan nature of pay-to-play is well documented in a trove of previously secret documents from an investigation of a New Jersey business that made about $1 million in campaign donations to a bevy of Jersey politicians and was rewarded with $84 million in government contracts. It isn’t known how the million in campaign contributions was factored into the firm’s government-approved overhead rate, but we’ll assume that by hook or crook, it got in as the cost of doing business.

It’s all over the place at state and local levels—the Pennsylvania Turnpike Commission, Bergen County in New Jersey, Goldman Sachs looking for state underwriting business in Massachusetts, and many more examples besides. In Washington, D.C., where the mayor and the city council have been enmired in cascading scandals, a bill introduced by council member Tommy Wells to rein in pay-to-play was rejected unanimously by his peers, though he personally voted for his own bill.

Need we say that campaign finance is the locus of the culture of corruption in American democracy? Anything with a nonprofit 501(c) status should have nothing to do with partisan political spending, which means returning 501(c)(4)s to their social welfare purposes or converting those that won’t or can’t to 527s. More broadly, the nonprofit sector has a stake in cleaning up America’s democratic process. If nonprofits are the essence of American democracy, then they should be concerned not only about 501(c) organizations in the game, but about the toxic nature of the political game itself.—Rick Cohen