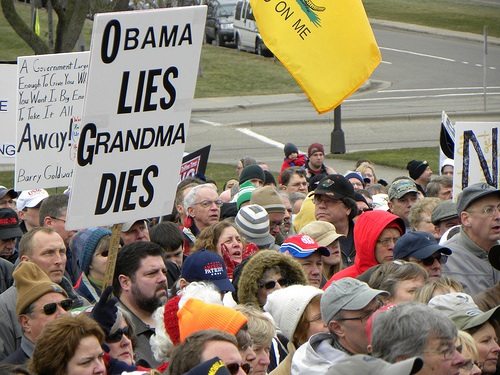 If Sheryl Gay Stolberg and Mike McIntire are correct in their reporting for the New York Times, the government shutdown wasn’t simply an action of recent vintage, but a long-term plan generated by conservative activists, led by former Attorney General Edwin Meese III, to destroy the Affordable Care Act at any cost, even at the cost of virtually all the other functions of the federal government. Meese’s co-conspirators in this high stakes game included David Koch, the money behind Americans for Prosperity, and Michael Needham of the Heritage Foundation’s recently-high-profile political arm, Heritage Action for America.

The Meese plan, kept secret but signed off on apparently by the “leaders of more than three dozen conservative groups,” was meant to be a “blueprint to defunding Obamacare.” According to Stolberg and McIntire, “It articulated a take-no-prisoners legislative strategy that had long percolated in conservative circles: that Republicans could derail the health care overhaul if conservative lawmakers were willing to push fellow Republicans—including their cautious leaders—into cutting off financing for the entire federal government.”

In other words, the current government shutdown wasn’t the result of an impasse between House Speaker John Boehner, Senate Majority Leader Harry Reid, and President Obama, but the product of a long-term plan by Meese, Koch, and others to kill the Affordable Care Act no matter what the cost, even if it meant shutting down parts of the federal government, furloughing hundreds of thousands of workers, and cutting social safety net services. The strategy of these conservative leaders included sample Q&As (Q: “What happens when you shut down the government and you are blamed for it?” A: “We are simply calling to fund the entire government except for the Affordable Care Act/Obamacare”), talking points for shutdown advocates (such as Boehner’s “Obamacare is a train wreck” meme), and action scripts (for example, the burning of fake “Obamacare cards,” etc.).

The purported strategy exhibits amazing political chutzpah. Congress passed the Affordable Care Act in 2010, having forced compromises from the Obama White House to make the program as dependent on private insurers and as distant from a single-payer system as possible. Even then, House Republicans (plus Senator Ted Cruz) did all they could to cut the legs out from the program, but that wasn’t enough. In an all-or-nothing gambit, Meese, Koch, and the others were going to hold a budgetary gun to the nation and demand that the Affordable Care Act’s implementation be halted—regardless of the legislative process.

If the reporting of Stolberg and McIntire is accurate, here is the list of organizations they cite in the article as having had some part in this plan to advocate the interests of billionaires like Koch and tell ordinary Americans looking forward to the benefits of national health insurance reform and expecting to receive federally funded services from the FY2014 federal budget to go without.

Apparently, powerful, wealthy, conservative interests have been planning the government shutdown for some years. It is a testament to their organizing abilities to have pulled this off, with Meese and his allies keeping their formal agreement out of the press until now. Their limited circle of voices and interests can bring the federal budget to its metaphorical knees, while the interests of the American public who want and need a functioning government get run over roughshod. Do you think nonprofits ought to be speaking up about the shutdown? The secret Ed Meese cabal is a powerful reason why.—Rick Cohen