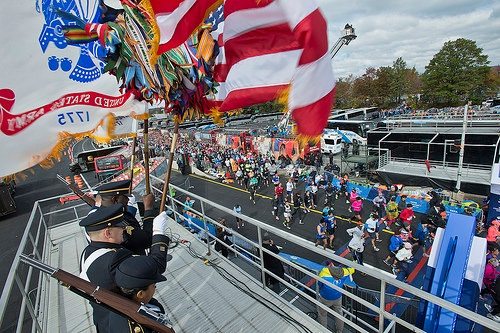 The New York City Marathon raised over $16 million this past Sunday with more than 50,000 participants, despite fewer charity spots than previous years. A spokesperson for New York Road Runners (NYRR) anticipates that the marathon’s charity runners will be found to have raised between $25-$30 million this year, once final numbers are available in early January following year-end reporting.

The annual marathon has been a significant attraction for charities since the program began eight years ago. Prospective runners partner with charities working with the New York City marathon and set fundraising goals in order to gain entry into the race.

However, many participating nonprofits’ fundraising efforts were upended after the 2012 cancellation of the marathon following Hurricane Sandy. The downward trend of revenue loss continued for the 2013 marathon, which saw an unprecedented decrease in charity entries by 3,000. Popular charities in previous years, like Girls on the Run NYC, Autism Speaks, and the Multiple Myeloma Research Foundation (MMRF), said last year’s marathon was the first time they were unable to fill their charity spots or reach previous fundraising benchmarks.

The director of Endurance Events for MMRF said that in 2011, the charity had 125 runners who raised nearly $575,000. According to their Facebook page, for this year’s marathon, the charity had only 75 runners and raised less than half of their total from three years ago, at $275,000. Moreover, the $16 million raised this year is less than half the total from the 2011 marathon, at $34 million before the storm.

“We see [2013] as an outlier,” said NYRR vice president of development and philanthropy Michael Rodgers last year. “We’ll continue to monitor how charities do, but for us, we see it as direct correlation to the cancellation last year.”

Unfortunately, while the marathon in total had been the largest in history for the most finishers, the number of charity runners is still modest compared to other years. The drastic decrease in those participating in last year’s marathon charity program is due to the fact that runners who had been fundraising for the 2012 cancelled marathon automatically gained entry to the 2013 marathon. As such, charities that had planned on having participants fundraise in order to gain entry now had to find others willing to do the same. This year’s decrease is due simply to spots available being more limited, increasing competition amongst the prospective entrants and the charities themselves. NYRR added 200 spots from previous years’ 1500, bringing in the most donations out of any other organization at $4,895,373.

The commercialization of the nonprofit sector has been a topic of discussion amongst NPQ writers before, and surely one of the important considerations to be taken into account was if partnership with a corporation—in this case, Tata Consultancy Services—detracts from the nonprofits’ missions. The question may require an analysis in greater depth of the cost-benefit relationship of a nonprofit’s participation in the marathon and the donations received. NYRR charges charity partners between $450 to $995 per runner, compared to $255 for regular American runners.

With the changing face of fundraising for the NYC marathon, whether the charity numbers will stabilize in the years following Sandy is still yet to be determined. However, the promising increase of entrants for this year’s race may be driving the marathon in the direction of its former charitable glory.—Shafaq Hasan

CORRECTIONS: This article has been altered from its original form to reflect new information that came to us after publication. The number of finishers in the 2014 marathon was 50,564; “over 60,000” was an overestimation. Likewise, “over $16 million,” although accurate, does not reflect that in 2013, more than 8,200 runners raised more than $25 million—with approximately 8,500 charity runners this year, the amount raised should be higher. Nonprofit Quarterly thanks NYRR for the update.