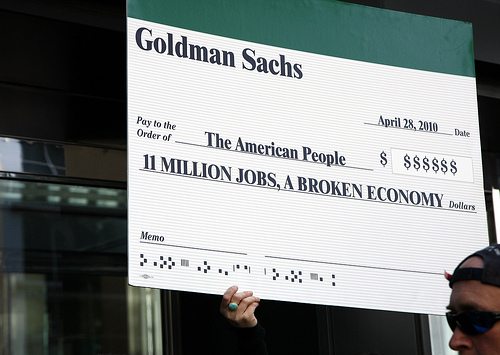 Goldman Sachs is investing $9.6 million in a New York City adolescent convict rehabilitation program through social impact bond financing. While NPQ has frequently taken note of the social impact bond concept (for example, see here, here, and here), which is similar to a futures market for nonprofit outcomes in which private investors “pay for success,” the New York Times reports that New York City will be the first city in the U.S. to test the concept. Goldman is counting on the venture’s success to reduce recidivism among young Riker’s Island inmates in return for a healthy profit (and perhaps an outsized public relations bonanza). A recent report in the Boston Globe, by the way, reports Massachusetts is launching a similar effort in the fields of homelessness and youth services.

Here’s how it works in NYC: the Bloomberg administration puts no New York City taxpayer money upfront, while Goldman provides the funding to MDRC, a social service agency which organizes and oversees a program called Adolescent Behavioral Learning Experience (ABLE), which provides counseling for approximately 3,400 adolescent inmates each year. Bloomberg Philanthropies, the multi-billionaire mayor’s personal foundation, is providing a unique angle on the social impact bond concept in this case by providing a $7.2 million loan guarantee in case the program fails. Mayor Bloomberg is upbeat about the potential public good social impact bonds can accomplish, stating that “this promising financing model has potential to transform the way governments around the country fund social programs, and as first in the nation to launch it, we are anxious to see how this bold road map for innovation works.”

Some nonprofit figures are less sanguine about the wisdom of inviting private investment to take the helm on traditionally public responsibilities. In this camp is Mark Rosenman (who NPQ has cited on this issue in the past), a professor emeritus at Union Institute and University in Cincinnati. Says Rosenman, “I’m not saying that the market is evil but I am saying when we get into a situation where we are encouraging investment in order to generate private profit as a substitute for government responsibility, we’re making a big mistake.” While the social impact bond history is too young to gauge its wisdom or effectiveness, the logic of it seems impeccable to some. Jay Gonzalez, the Massachusetts secretary of administration and finance, states, “The beauty of this is if they perform to get the results, then we pay. If they don’t, we don’t pay.”