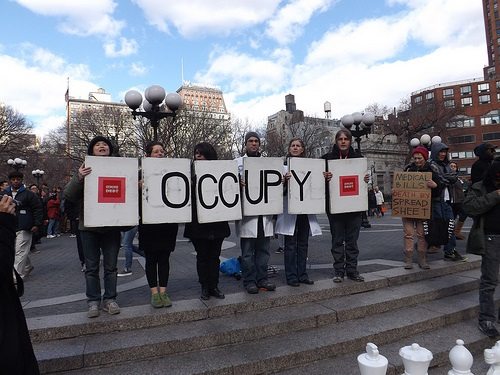 In an effort to educate the public through activist theater with outcomes, Occupy offshoot Strike Debt, through its Rolling Jubilee program, purchases people’s personal debt—mostly medical—cheaply from lenders and then forgives it. (We reported on this originally in April.) So far, it has eliminated $14,734,569.87 of debt owed by 2,693 people while spending only $400,000 in the secondary debt market.

The “secondary debt market” is created when institutions sell debt that has proved difficult to collect to a third party, which then tries to collect enough to make a profit. When Rolling Jubilee buys a debt, they send notes telling debtors they’re off the hook.

“No one should have to go into debt or bankruptcy because they get sick,” said Laura Hanna, an organizer with the group. Hanna said 62 percent of all personal bankruptcies have medical debt as a contributing factor.

NYU professor Andrew Ross, who is a member of Strike Debt and the author of Creditocracy and the Case for Debt Refusal, says, “Very few people know how cheaply their debts have been bought by collectors. It changes the psychology of the debtor, knowing this. So when you get called up by the debt collector, and you’re being asked to pay the full amount of your debt, you now know that the debt collector has bought your debt very, very cheaply. As cheaply as we bought it. And that gives you moral ammunition to have a different conversation with the debt collector.”—Ruth McCambridge