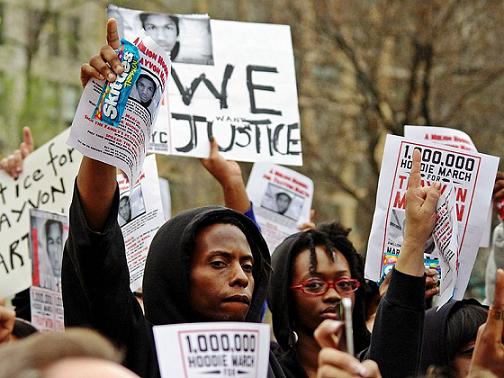 Initially angered and frustrated by the Zimmerman verdict regarding the killing of young Trayvon Martin, Dr. Robert Ross, President and CEO of The California Endowment, now describes himself as infused with “a sense of strategic resolve.”

“It appears that the Zimmerman jury handed our cause a gift,” Ross writes in the California Endowment blog. “In the arc of social justice, equity, and civil rights, outrage is the fuel for civic action.”

Under the rubric of “Hoodies Up for Trayvon,” Ross describes three elements of his personal strategic resolve: to “unabashedly declare a special brand of love for my sons and brothers: young men of color” who he says are “valued, cherished, appreciated, and embraced”; “to visit the notion of a mutually purposeful social contract”; and to “act—Fathers must be better fathers, men must be better husbands and partners. Mentors are needed. Schools must return as portals of opportunity, and not pipelines towards prison. Prisons and juvenile halls must breathe restoration and rehabilitation, rather than a culture of punitive vengeance and hopelessness.”

Although expressed in purely personal rather than institutional terms, Ross’s post has an underlying resonance for philanthropy, since he heads the fifteenth-largest foundation in the U.S., with assets of over $3.66 billion. What is philanthropy prepared to do—and what should it do—in response to the Zimmerman verdict?

That was the ostensible question behind an online gathering of philanthropists convened Saturday by Occupy Philanthropy (with a mission to “galvanize philanthropy as a whole to be more responsive to the call for social and economic justice so clearly and resonantly articulated by the Occupy moment), the EDGE Funders Alliance (to “increase resources for community well-being and transnational organizing in ways that promote justice and build lasting, meaningful change…addressing the systemic nature of the social, economic and ecological crises threatening the future of our planet”), the Funders’ Collaborative on Youth Organizing (“to substantially increase the philanthropic investment in and strengthen the organizational capacities of youth organizing groups across the country”), and others.

Drawing on a little of the Occupy call and other perspectives that have been published online, the contours of a philanthropic response are developing.

Ross’s statement reflects high-level commitment of the California Endowment to the issue of black men and boys. Ross himself took a three-month leave from the foundation to research and create a platform on the challenges of black men and boys, calling for action to redress conditions such as the 84 percent of black boys in urban areas not reading at a third-grade level, the overreliance of suspensions and expulsions for disciplining male black students, and the chronic absenteeism of black pupils. During this past year’s Council on Foundations meeting, the Endowment was instrumental in bringing together a couple of dozen other foundations to pledge “to form an alliance to address the issues, explore promising strategies and research the data to support action…on issues facing black men and boys of color.”

Participating in the Occupy call was Rashid Shabazz, a program officer of the Open Society Foundations Campaign for Black Male Achievement, another nationally visible foundation effort on black men and boys. However, the challenge for foundations is to turn this concern for black men and boys into concrete grantmaking programs built not from national experts’ social engineering, but from the explanations of groups on the ground in local communities as to what is specifically needed from foundations there. While it is not possible to know exactly how these efforts are turning out, foundations are responding. In Pittsburgh, for example, the Heinz Endowments are holding community focus groups and working with a local advisory board to implement its African American Men and Boys Initiative. If it lives up to its mission statement, the program holds promise:

The condition of Pittsburgh’s African American men and boys is a consequence of both historical and current injustices, including enslavement, structural racism and a narrow definition of black manhood. We respect the historical context and scope of the task, as we move to support the African American community in its continuing effort to address the challenges for men and boys. We recognize that the needed change will require active participation and support on the part of a significant number of individuals and institutions in the Pittsburgh region.

Based in Miami, the Knight Foundation offers a Black Male Engagement program with grantmaking in Knight communities like Detroit, Philadelphia, Baltimore, and Miami for “engaging black males in what matters to them” (the example cited a $492,000 grant for a e-mentoring program) and “challeng[ing] negative stereotypes of black males by engaging thousands of others in the real life stories and positive community actions led by them.” The Schott Foundation website describes its multi-partner Black Male Donor Collaborative aimed at “identify[ing] successful program interventions and policy levers to address the achievement disparities impacting the most extremely underperforming group in New York—black males.” The focus on identifying and overcoming disparities is apparently—and positively—key to these programs.

Represented on the call, the elite social entrepreneurship organization, Echoing Green, started a program in late 2012 called the Black Male Achievement Fellowship, awarding eight fellowships of $70,000 plus 18 months of technical assistance for black men who are “generating new ideas and best practices in the areas of education, family, and work such as initiatives related to fatherhood, mentoring, college preparatory programs, community-building, supportive wage work opportunities, communications, and philanthropic leadership.” On the Echoing Green website, a video describing the fellowship features OSF’s campaign director, Shawn Dove, explaining the program as well as the OSF campaign. Like Echoing Green historically, there is an elite dimension to its BMA Fellowships, which may be necessary in some way to overcome disparities in leadership.

On the Occupy conference call, Lani Shaw of the General Services Foundation remarked that one of the problems is the lack of black males in foundation program officer positions—or blacks in general in foundation decision-making roles. It’s undeniably important to strengthen the leadership cadre in foundations so more people like Bob Ross can establish philanthropic grantmaking priorities and get foundations to move creatively and forcefully on those issues revealed once again through the death of Trayvon Martin and the trial of George Zimmerman.

The specifics behind Shaw’s point are revealed to an extent by the self-reported statistics on foundation staffing in a recent report from the Council on Foundations (with 857 foundations reporting full-time paid positions):

Black men are particularly underrepresented in professional decision-making capacities in foundations, usually from one-half to one-third the proportion of positions held by black women: