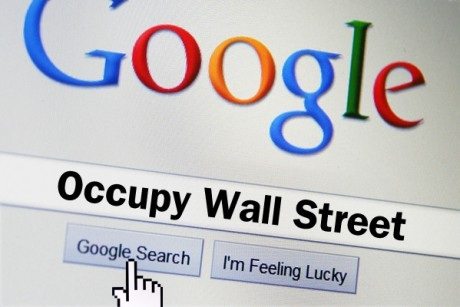 Josh Harkinson reports for Mother Jones that there is a nonprofit kind of Huffington Post emerging to serve and report on the Occupy movement. Filmmakers David Sauvage (New York) and Larry Taubman (Beverly Hills) have cofounded Occupy.com, which Mother Jones describes as “a nonprofit multimedia and news-aggregation site…with financial backing from Hollywood.”

Together they purchased the Occupy.com domain “for a large confidential sum” and put in another $130,000 as seed money. The purpose that motivated them, according to Taubman, was “that the Occupy movement needed a way in which it could speak for itself, and without having to do it through the lens of other media.” Sauvage and his team of six editors have “total control over the site’s content.”

That is quite a hierarchical and centralized structure for the otherwise collectively governed Occupy movement. Harkinson said he learned of the Occupy.com launch from a high-end public relations firm and met Sauvage at an event with celebs and socialites—far different than the typical Occupy culture. Sauvage and Taubman are consciously aiming to connect the Occupy movement to what Harkinson calls “a different crowd.” In contrast to existing Occupy-focused websites such as OccupyWallSt.org, NYCGA.net, and Occupy.net, which focus on communications within the Occupy movement, Sauvage apparently is aiming at “the millions of people who are interested in the movement but haven’t been able yet to engage with it.”

So here is the Occupy movement confronting a sympathetic but culturally different structure. Occupiers are unpaid, but some of Sauvage’s team members will be earning “living stipends.” The editors, not Occupy’s General Assembly, will control content. The Occupy movement has faced the contradiction of media for the many by the few before. The editor in charge of Occupy.com’s text-based content co-founded the Occupied Wall Street Journal, which Harkinson says “is embraced by the movement despite being controlled by a tight-knit group of editors working out of a private apartment.”

Sauvage’s launch is clearly timed to get the site up and running by the time Occupy’s spring offensive starts. He believes that the site can draw phenomenal numbers of visitors who are interested in and perhaps sympathize with the movement. The business model? Sauvage and Taubman may be supporters of the Occupy movement and have earned their bona fides by already having done media work with Occupy. But these aren’t guys living in pup tents, and neither are the celebs and socialites they’re trying to link in. Is Occupy.com going to be an organic part of the movement, sort of the Occupy movement’s Huffington Post, as Mother Jones suggests, at least in terms of HuffPo’s content aggregation side? Or will it be something that adopts the Occupy name but stands apart from the movement?—Rick Cohen