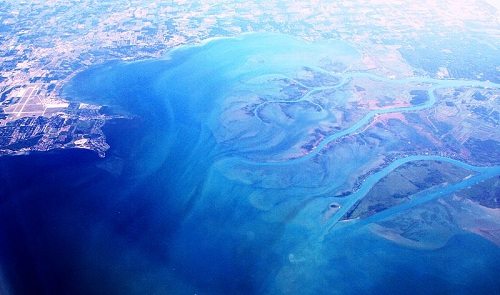 Jim Dreyer’s charity swim ended today on the Detroit side of Lake St. Clair after 51 hours—but that is not the real notable fact. Nor is it that he did the swim for Habitat for Humanity. The notable fact is that he did it while dragging two dinghies filled with 334 bricks—a load estimated to weigh approximately two thousand pounds—and a third containing water, Gatorade, nutritional drinks, and a crumbled cracker mixture for food.

He did he not complete the swim in the promised 30 hours, and he lost a dinghy along the way. Still, he seemed upbeat. “It is so good to be in Detroit,” he said. “Sorry I’m late.”

Dreyer calls himself “the shark.” He said that he has learned to swim in his sleep, saying, “It’s not on purpose. Your turnover rate slows down and you can wander off course and it’s not want you want to do, but your body keeps going. It’s like muscle memory but your mind takes you to a happy place.” Happy and hallucinatory; apparently, while on his journey, his mind produced visions of Jesus and a few ghost ships, a la Coleridge. “They come up to me and dissipate and I laugh,” he said.

Dreyer may be a great swimmer, but he is strained (in my humble opinion) when it comes to metaphors. “What I really wanted to show is that even though there’s a lot of financial pain in the state of Michigan—and nobody’s felt more pain than the city of Detroit—we don’t have to sink with the weight of our burdens,” he said.—Ruth McCambridge