On Veterans Day, We Stop and Consider 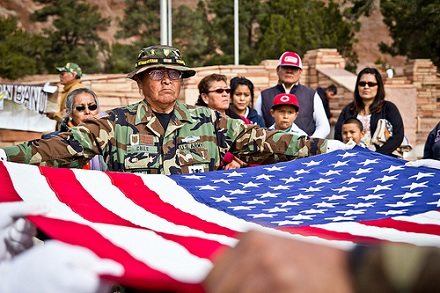 On Veterans Day, we are reminded of the gap between our society’s honoring of veterans as heroes and heroines and the actual treatment of veterans when they come home, which is brought into stark relief by the numbers. The U.S. Department of Veterans Affairs states that the VA provides care to almost 150,000 homeless veterans each year. One out of every 10 post-9/11 veterans in the civilian labor force is unemployed, though for all women veterans, the unemployment rate exceeded 13 percent in September and nearly hit 20 percent for women veterans of recent wars. Current surveys suggest that between 2.1 to 13.8 percent of U.S. troops deployed to Iraq and Afghanistan have post-traumatic stress disorder. A report from the Center for a New American Security finds that, despite being only one percent of the population, veterans account for 20 percent of all suicides in the U.S.

We’ve written a lot about the conditions facing veterans coming home, about the nonprofits that are doing good work trying to respond to their needs, and the all too common fundraising schemes that use the camouflage of charity to prey on veterans and donors who care about them. But today, we join the nation in honoring veterans with a selection of excerpts from The Meaning of Veterans Day, compiled by Amy and Leon Kass and available as an eBook here as part of their “What So Proudly We Hail” project, a program using classic American texts to teach about American ideals and civic life. We are honored to share these excerpts with you and hope that you join us in learning from these orators, authors, and poets as to what it should mean to our society to honor those parents, siblings, and children who have served our nation.

Hailed as America’s “poet of democracy,” Walt Whitman also served as a volunteer nurse in the U.S. Civil War.

Sen. John McCain (R-Ariz.) originally published an account of his more than five years as a prisoner of war in Vietnam in U.S. News & World Report in May of 1973.

“…I was finding that prayer helped. It wasn’t a question of asking for superhuman strength or for God to strike the North Vietnamese dead. It was asking for moral and physical courage, for guidance and wisdom to do the right thing. I asked for comfort when I was in pain, and sometimes I received relief. I was sustained in many times of trial.

Dedicating more than 60 years of his life to military service, Gen. Douglas MacArthur delivered the speech excerpted below to 2,100 West Point cadets in 1962 when the West Point Association of Graduates honored him with the Sylvanus Thayer Award.

“…Duty—Honor—Country. Those three hallowed words reverently dictate what you ought to be, what you can be, what you will be. They are your rallying points: to build courage when courage seems to fail; to regain faith when there seems to be little cause for faith; to create hope when hope becomes forlorn…

…They build your basic character, they mold you for your future roles as custodians of the nation’s defense, they make you strong enough to know when you are weak, and brave enough to face yourself when you are afraid. They teach you to be proud and unbending in honest failure, but humble and gentle in success; not to substitute words for actions, not to seek the path of comfort, but to face the stress and spur of difficulty and challenge; to learn to stand up in the storm but to have compassion on those who fall; to master yourself before you seek to master others; to have a heart that is clean, a goal that is high; to learn to laugh yet never forget how to weep; to reach into the future yet never neglect the past; to be serious yet never to take yourself too seriously; to be modest so that you will remember the simplicity of true greatness, the open mind of true wisdom, the meekness of true strength….

…This does not mean that you are war mongers. On the contrary, the soldier, above all other people, prays for peace, for he must suffer and bear the deepest wounds and scars of war. But always in our ears ring the ominous words of Plato, that wisest of all philosophers, ‘Only the dead have seen the end of war…’”

Gen. Omar N. Bradley presented the speech excerpted below to the Boston Chamber of Commerce on November 10, 1948 to recognize the end of World War II and to consider the path forward.

“…Armistice Day is a constant reminder that we won a war and lost a peace.

It is both a tribute and an indictment. A tribute to the men who died that their neighbors might live without fear of aggression. An indictment of those who lived and forfeited their chance for peace…

…Armed forces can wage wars but they cannot make peace. For there is a wide chasm between war and peace—a chasm that can only be bridged by good will, discussion, compromise, and agreement…

Excerpt from “What a Veteran Knows” – Joe Carter

After serving as a U.S. Marine for 15 years, Sgt. Joe Carter is a senior editor at the Acton Institute, an adjunct professor of journalism at Patrick Henry College and the online editor of First Things, where the essay excerpted below was originally published in 2009.

“…We know that in serving our homeland we gave up our ability to watch over our own homes.

We know that it meant leaving our families for far-off lands and seas and that no matter how many cards and letters and pictures and videos our families would send that it could never replace the time we missed being with our children, watching over them, and letting them know we were there to protect them.

We know Veteran’s Day is about the men and women we once served alongside: the voluble young marine, who was always eager to talk about her kids, and the reverent old soldier who led prayer in chapel. We still think of them from time to time, though always on Veteran’s Day. And when we meet our fellow veterans we always know exactly what we mean when we pat their back and take their hand and say, ‘Thank you for your service.’”

Lt. Gen. John F. Kelly served in the U.S. Marine Corps and was commander of the Multinational Force-West in Iraq from 2008 to 2009. Four days before he delivered the speech excerpted below, Kelly’s son Robert was killed in Afghanistan on his third tour of duty.

“…We can also take comfort in the fact that these young Americans are not born killers, but are good and decent young men and women who for going on ten years have performed remarkable acts of bravery and selflessness to a cause they have decided is bigger and more important than themselves. Only a few months ago they were delivering your paper, stocking shelves in the local grocery store, worshiping in church on Sunday, or playing hockey on local ice. Like my own two sons who are Marines and have fought in Iraq, and today in Sagin, Afghanistan, they are also the same kids that drove their cars too fast for your liking, and played the God-awful music of their generation too loud, but have no doubt they are the finest of their generation. Like those who went before them in uniform, we owe them everything. We owe them our safety. We owe them our prosperity. We owe them our freedom. We owe them our lives…”

Word over all, beautiful as the sky!
Beautiful that war, and all its deeds of carnage, must in time be utterly lost;
That the hands of the sisters Death and Night, incessantly softly wash again, and ever again, this
soil’d world:
. . . For my enemy is dead—a man divine as myself is dead;
I look where he lies, white-faced and still, in the coffin—I draw near;
I bend down, and touch lightly with my lips the white face in the coffin.