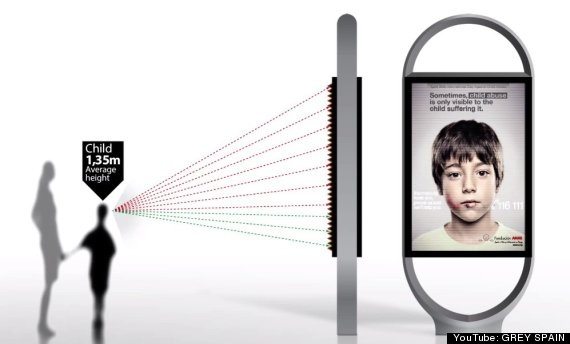 The ANAR Foundation has released a clever advertisement that targets youth affected by child abuse by sending two different messages that vary based on the height of the viewer. The Spanish organization used lenticular printing to change the appearance of the ad for anyone under 4’5”.

The average adult walking by will see only an image of a young boy and the message, “Sometimes child abuse is only visible to the child suffering it.” From the perspective of someone shorter than four-and-a-half feet tall, the ad shows bruises on the boy’s face, along with ANAR’s hotline number and the message, “If somebody hurts you, phone us and we’ll help you.”

The foundation aims to get an important message out to battered youth that there are ways to get help, even when your aggressor is right by your side. The video below, created by the ad agency Grey Spain, demonstrates the powerful image being conveyed to children:

The ad campaign has gone viral online, and the YouTube video has already reached over 6 million views. How can this thoughtful approach to advertising extend itself to help other nonprofits raise awareness for causes?—Aine Creedon